From The Bench by Judge R. Brent Elliott 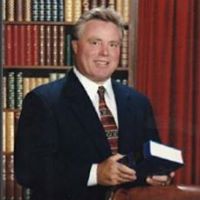 As the operation of our courts returns to “normal,” I will make good on my earlier promise to provide you with some of the more colorful moments or experiences from my time as a judge and as a practicing attorney.

One of my favorite attorney jokes came in the form of a comic cartoon with two simple frames. The first depicts a typical courtroom scene during a jury trial. The judge is seated on the bench with the court reporter at his side. The defendant, his attorney, and the prosecutor are seated at their respective counsel tables. Jurors are seated in the jury box with spectators observing from the gallery. All eyes are on the Judge as he states, “Will the defendant please rise!”

Frame two reflects essentially the same scene with two persons standing. One is the defendant and the other a juror. All astonished eyes are on the juror standing with head bowed. The Judge has leaned over to his court reporter and said “I believe we may have a problem.”

About three years ago, I witnessed a similar problem. I was presiding over a criminal jury trial and the prosecuting attorney was presenting the State’s case. A witness was called who had been involved in the investigation for the past two years. The witness testified they were acquainted with the defendant and, as is customary, was asked to point him out for the record. The witness promptly replied, “He is the man seated over there wearing the light gray suit.”

Unfortunately, or fortunately, depending on how you look at it, the defendant was wearing a dark navy blue suit that could not possibly be confused with the light gray suit being worn by his attorney. A hush fell over the courtroom as if Bad Leroy Brown had walked in. In
that moment of silence, I was not sure which facial expression was the most appropriate. It may have been the “deer in the headlights” look of the prosecutor, or the terrified look on the face of the defense attorney. Most likely though, it was the slight grin on the face of the defendant.

When the shock wore off the trial proceeded with other witnesses testifying. Upon conclusion both the defendant, and his attorney, were acquitted of the charges.

PERSONAL NOTE: As I write this article I realize I have but three years, eight months, and ten days remaining in my term as Circuit Judge. I will retire at the end of my term. Speculation that I might retire early is simply wishful thinking. To paraphrase a former Judge, “I would retire early, but it would make way too many people happy.” I also wish to mention that I just learned retired Circuit Judge, Warren McElwain, is scheduled to undergo some corrective heart surgery within the week. Our thoughts and prayers are with him and his family. I am confident his commitment to keeping himself in top physical condition will serve him well in his recovery.