This week, the Missouri House approved HB 1720, which will renew several key agricultural programs that were set to expire or had already expired.  This bill is similar to a bill passed last year in the House before some of the programs expired, but unfortunately that bill did not get passed in the Senate.  Here is a list of a few of the programs in the bill.

The bill extends tax credits available under the Missouri Agricultural and Small Business Development Authority. These credits have supported ag projects in 103 counties and have generated benefits of more than $260 million since 2000.

The bill extends the Meat Processing Facility Investment Tax Credit through 2028. This program was created to stimulate investment in the meat processing industry in Missouri and enable the livestock industry to capture more value in the form of further processed meat products.

The bill expands the Family Farm Livestock Loan Program so that more Missouri farmers will qualify. The program is currently limited to farmers with less than $250,000 in gross sales per year. The bill would double that amount allowing more farmers to qualify.

The bill creates the Ethanol Retailers Incentive to provide a tax credit to retailers selling higher ethanol blend at the dealer’s service station, as well as a biodiesel tax credit for retailers producing or selling biodiesel.  Missouri ranks in the top third of states for biodiesel consumption.

The bill also expands the Wood Energy Tax Credit into 2028 and consolidates all regulations dealing with anhydrous ammonia into the Missouri Department of Natural Resources.

Finally, the bill would ensure the soybean producers’ assessment, also known as the soybean checkoff, continues at the state level even if the program is discontinued at the national level. Soybean producers participate in the checkoff by contributing at a rate of 0.5 percent of the market price per bushel. The dollars are then invested in a multitude of projects designed to strengthen the soybean industry.

As you can see, this bill will do a lot of good for agriculture, which is important to our family farms in NW Missouri. While I am skeptical of many government run tax credit programs, I believe these programs work as intended, are beneficial to our region, and I was happy to be one of its supporters.  The bill now moves to the Senate for consideration, where hopefully it will find a better fate that it had last year. 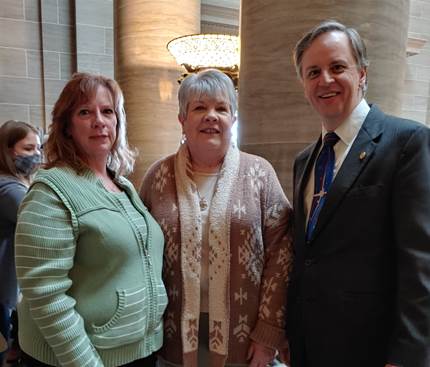 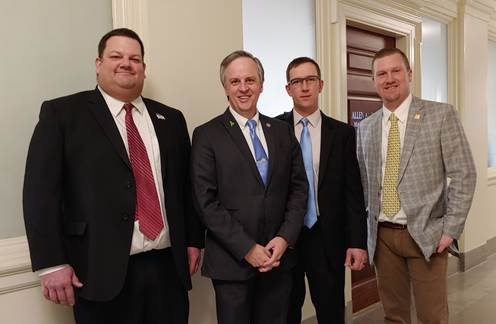 The Missouri House has given initial approval to legislation that would give the General Assembly greater flexibility when appropriating funds to fight opioid addiction. The bill was created in anticipation of a settlement with opioid distributors, and is designed to allow lawmakers to allocate funds to programs in state government that provide resources to victims of addiction.

It was in July that the Missouri Attorney General announced the state had reached a settlement with Johnson & Johnson and multiple opioid distributors. If all municipalities in Missouri sign onto the proposed settlement, the state will receive just over half a billion dollars. These funds would be used for addiction treatment, recovery, and intervention programs.

The bill’s sponsor told his colleagues, “It wouldn’t mean money had to go to these departments, but it would give us the ability to appropriate. It would give them the ability to come forward and request funds if they have a need for them, and really we want to encourage collaboration among the departments, among state government, to make sure that these funds are used to combat the ill effects and the consequences of opioid misuse.”

In 2020, 1,842 people in Missouri lost their lives to drug overdose. The majority (73 percent) of the drug overdose deaths involved opioids. Supporters say HB 2162 is important to ensure the various state departments receive the funds they need to offer life-saving treatment to those battling addiction.

The bill received strong bipartisan support in the House. It requires an additional vote before moving to the Senate.

The House Independent Bipartisan Citizens Commission recently approved a final state redistricting plan. The final plan, which was approved unanimously by all 20 commission members, is the first plan approved by a House Commission since 1991.

The final redistricting plan has an overall difference in population of 5.8 percent between its largest and smallest districts. The commission has posted the final plan for public viewing and can be accessed from the Redistricting Office’s website at https://oa.mo.gov/budget-planning/redistricting-office. The page will include an interactive map as well as the official filing documents submitted to the Secretary of State, and other supplemental maps and tables.

The commission was formed for the purpose of redistricting the 163 districts in the Missouri House of Representatives. It held public hearings throughout Missouri last fall. The commission had until January 23, 2022 to finalize their plans.

The Senate Independent Bipartisan Citizens Commission failed to submit a tentative plan to the Secretary of State’s office by the December 23, 2021 deadline. Per the Missouri Constitution, the Missouri Senate will now be redistricted by a new commission of six members appointed from among the judges of the appellate courts by the Missouri Supreme Court.