This week, the House worked on HJR117, which addresses some the flaws identified in the Medicaid Expansion program.  Here is some background.  Medicaid was originally designed to pay the doctor bills for those below poverty, and the mentally or physically handicapped.  When Obamacare passed, it assumed Medicaid would expand to also include some able bodied people above the poverty line.  But courts said that was a choice by the states, so some states expanded and some did not.  Missouri did not, until two years ago when a left-wing, out of state, political group partnered with an industry who thought they could make some big bucks and funded a ballot measure to expand Medicaid.  93% of Missouri counties voted against Medicaid Expansion, but due to how our ballot measure system works (which I wrote about last week) the measure passed and is now enshrined in our state constitution.

There are three flaws that HJR117 fixes. The first is that our Medicaid system is the only one in the nation that pays for other states’ Medicaid patients, which is insane.  If someone on Medicaid from Missouri gets medical care in Kansas, Missouri pays the bill, which makes sense since the patient was a Missourian.  But if a Kansan gets care in Missouri, your Missouri tax dollars pay the Kansan’s bill.  HJR117 would fix that.

Second, the Medicaid Expansion ballot measure required that additional people be allowed on Medicaid, but did not spell out a funding source to pay for their care.  So now we are using our existing budget to pay those extra bills.  Right now, revenues are up and we can afford it, but in the future expansion may mean we cannot afford as much for schools, roads, or care for the original Medicaid population.  HJR117 would separate funding for care of the original population from the expansion population so in lean times the poor and handicapped for whom Medicaid was originally designed could still receive free care.

Finally, HJR117 would not make the proposed changes automatically, but rather put those changes to a vote of the people.  That means it would be your choice whether the Medicaid Expansion reforms would be implemented or not.  Look for that on the August or November ballot if the measure also passes the Senate. 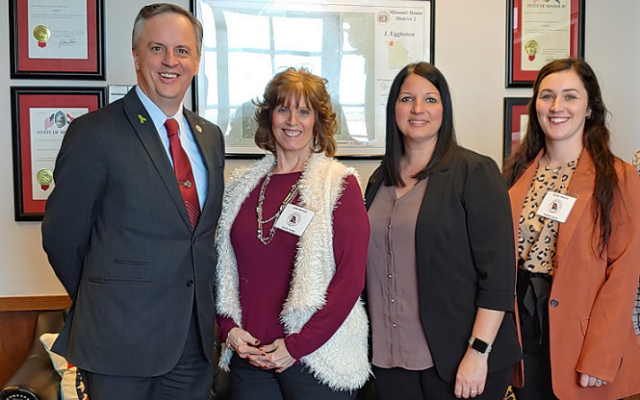 FROM THE CAPITOL NEWS DESK

The Missouri House has given first-round approval to two bills designed to protect Missourians from mandates that would take away their right to decide whether to receive a COVID-19 vaccination.

House members approved HB 1686 to make it clear that government agencies and public schools cannot require a COVID-19 vaccination as a condition of employment. It also prohibits fines or other penalties based on an individual’s vaccination status. Additionally, it reaffirms an employee’s right to raise a religious objection to receiving a vaccination.

The bill’s sponsor said, “This bill doesn’t prevent anybody from receiving a COVID-19 vaccination. It doesn’t prevent businesses from having a COVID-19 vaccination requirement. It simply forbids government mandates with certain exceptions, and gives clarity to our businesses on how they offer those religious and medical exemptions for their employees.” He added, “We’re just trying to reestablish this exemption rule that has been working for other medical treatments prior to this whole pandemic.”

One supporter of the bill said he thinks it meets the needs of both sides. “It says that employers have a right to ask what they want from their employees to do what they think is safe, but it also respects the rights of the employees – their religious rights and their freedoms,” he said.

The House also approved HB 2358 & 1485 to clearly affirm the right of an employee to receive an exemption from a COVID-19 vaccine requirement if the employee requests one based on certain sincerely held beliefs. The bill clarifies the religious exemption includes theistic as well as non-theistic beliefs. The bill would require an employer to provide reasonable accommodations for the request unless clear and convincing evidence proves it would cause an undue hardship or be a direct threat to other employees or customers.

HB 2358 & 1485 also ensures an employee who is injured, disabled, or killed due to an employer-required COVID-19 vaccination would be compensated. The bill would treat the injuries resulting from the vaccine as an occupational disease. Additionally, an employee terminated or discharged for failing to comply with a COVID-19 vaccination requirement would still be eligible for unemployment benefits.

And lastly, the bill would prevent an organ transplant hospital from denying an organ transplant to a patient based on the patient’s Covid vaccination status.  That measure is identical to HB1861 by Rep. Eggleston who has donated one of his kidneys to help his wife.

Both bills now require another vote in the House before moving to the Senate for consideration.

Missourians would have their right to gather for religious services further protected under a bill given first-round approval by the Missouri House of Representatives. House members approved the Missouri Religious Freedom Protection Act, which is in part a response to the closures of places of worship that occurred during the COVID-19 pandemic.

The sponsor of the bill said it ensures that “government entities in this state cannot close our places of worship. There are a few limited exceptions in the bill but the idea here is to make sure some of the things we saw take place over the past couple years across the country never take place again in our state.”

Under the bill, no public official could issue an order that has the effect of limiting or prohibiting a religious group or place of worship from holding religious services or meetings. This prohibition would not apply to emergency evacuation orders involving imminent danger from flooding, fires, tornadoes, earthquakes, terrorist threats, civil unrest, or hazardous materials incidents. Once the imminent danger has passed, religious services would be allowed to resume.

The sponsor noted that places of worship meet not only the spiritual needs of the population but also provide help to those in need in the form of food and shelter and other critical services. The sponsor also noted that data shows people who were able to attend religious services during the pandemic saw their mental health improve.

“Our places of worship operate in a very unique space in this state. We in government should not close them down and that’s what this bill does,” he said.

The bill now requires another vote in the House before moving to the Senate.