Every 10 years, our nation conducts a census, and a few days ago data from the 2020 census was released.  And for northwest Missouri, the results could have been better.  In the last 10 years, Clinton County gained about 400 people (+2.1%).  Andrew County gained 840 (+4.9%).  Daviess County held steady, dropping only 3 people.  All other counties in our corner of the state lost between 4% and 15% of their population.  Buchanan, Livingston, and Grundy each lost 4-5%.  Atchison, Mercer, Putnam, and Caldwell each lost about 6.5%.  Gentry, Nodaway, Worth, and Harrison lost about 9%, Sullivan declined 10.6%, Holt County lost 14%, and DeKalb County lost 14.5%.  DeKalb lost 1,863 people, but a lot of that is due to the closing of Crossroads Correctional Center in Cameron, which held up to 1,440 prisoners (inmates count in a county’s population).  Population change maps can be found at www.tinyurl.com/zmhz9d72 .

Missouri counties that saw gains of 10+% were Platte, Clay, Boone, St. Charles, Lincoln, and Christian.  Other counties that gained were those around KC, St. Louis, Columbia, Springfield, and Joplin, which were already some of our states most populated counties.  Since each member of the Missouri House of Representatives and Missouri Senate has to speak for about the same number of people (around 38,000 for House, and 181,000 for Senate), this means the urban areas that gained population will likely get more legislators and our rural areas will likely have fewer.  This hurts our voice in state government.  It also means each urban district will get geographically smaller, and each rural district will get bigger.  There was already a big difference, with most urban House districts covering about 25 square miles, whereas my rural district is about 2,300 square miles (about the size of Delaware).

To understand why this population shift is occurring, just pull out your local high school yearbook from 10 years ago and see how many of that senior class is still in the community.  To curtail our population drain, parents, school officials, and community leaders should help our high schoolers understand the roles they could play in their hometown as they consider different career possibilities.  If students think their hometown is missing something, tell them that is not a reason to leave, but instead is an opportunity to stay and provide that missing something to their community.  Maybe it is a coffee shop or a bowling alley or a health clinic or a hardware store or a tourist attraction.  Whatever it is will be an entrepreneurial opportunity for them and a job creator for their hometown.  And if they have to go off to college to prepare for these careers, remind them that home is a great place to come back to when they are done with their education.  By encouraging our youth to think about careers here at home, we can retain our best and brightest, and keep our wonderful rural Missouri vibrant. 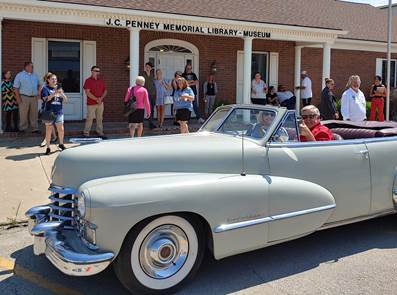 Missourians from all parts of the state made the trip to Jefferson City on Tuesday, August 10 to celebrate 200 years of statehood for the Show-Me State. The official celebration of Missouri’s Bicentennial Statehood Day is part of a series of events throughout the state meant to recognize Missouri’s rich history and promising future.

Federal and state officials were on hand to participate in the event that took place outside the Missouri State Capitol Building. Those in attendance heard performances by the Missouri National Guard’s 135th Army Band, and the Missouri Choral Directors Association All-State Festival Choir. Attendees also heard Missouri’s Poet Laureate Mary Frances Wagner read her poem entitled “Missouri”. The poem can be viewed online at: https://www.missouriartscouncil.org/missouri-poet-laureate/.

The event was also an opportunity to unveil the new Missouri Statehood stamp. The stamp art features a photograph of Bollinger Mill State Historic Site. The photo shows the multi-story mill, which dates to the Civil War period, as well as the Burfordville Covered Bridge, Missouri’s oldest and one of just four remaining covered bridges in the state. For more information on the stamp, please visit https://store.usps.com/store/product/buy-stamps/missouri-statehood-S_481104.

During the event, Gary Kremer of the State Historical Society spoke about Missouri’s origins as it was admitted as the 24th state on August 10, 1821. Kremer noted the state, which now has a population of more than 6 million, had a population of only 70,000 as it became a state. He also spoke about the compromise that was made to allow Maine to enter the union as a free state and Missouri as a slave state. Kremer noted an enduring consequence of that compromise was that race relations have been a central theme of Missouri history for more than 200 years.

The crowd also heard from Missouri Supreme Court Chief Justice Paul Wilson, who said, “As I think about all that Missouri history includes and all that our history means, I’m proud. Not always of what happened or why — because Missouri and Missourians have our fair share of shortcomings — but I am proud that our history is what we made it, together.”

Missouri Governor Mike Parson wrapped up the event by speaking to the crowd about the importance of the special day. He said, “Missouri citizens get to be part of this very special day, and there’s only going to be one of these days, and we get to be part of it. I encourage all of you to take a little time today to think about your own family, think about where you came from, your family history, your family tree, and find out what you’ve overcome in Missouri’s history, and why we’re so privileged to be Missourians, and why it’s an honor to be a fellow Missourian with all of you who are here today, and to celebrate a birthday like no other.”

Parson also read a portion of the official proclamation he issued, which designates August 10 as Statehood Day. Parson’s proclamation said, “Whereas the year 2021 marks the 200th anniversary of Missouri statehood and a collective hope that future Missourians will learn from its past and chart a dynamic and unified course for the future; now, therefore, I, Michael L. Parson, Governor of the Great State of Missouri, do hereby proclaim August 10, 2021, to be the Bicentennial Statehood Day for the State of Missouri.”

Legislation approved during the 2021 legislative session will give some juvenile offenders in Missouri a chance at parole when it becomes effective later this month. The provision, which was added in the House as an amendment to a Senate Bill, was driven by the case of a man named Bobby Bostic, who was sentenced to 241 years in prison when he was 16.

When it takes effect, the new law will make anyone sentenced while a juvenile eligible for parole after serving 15 years of any sentence. It doesn’t apply to convictions for first-degree or capital murder.

The sponsor of the amendment stressed that it does not automatically grant freedom to any offender.

“Ultimately it falls into the hands of the Parole Board. It’s up to their discretion. Every juvenile that’s in the system currently has a different criteria they have to meet obviously,” said the amendment sponsor. He added, “I think it’s our duty to trust the Parole Board to do their job, and if anybody can be rehabilitated I do believe that we should put that faith into our youth.  I trust them far more than someone else to be rehabilitated in the correctional facilities.”

The amendment sponsor and numerous other lawmakers in both parties think Bobby Bostic has been rehabilitated. In 1995, Bostic and an accomplice robbed a group of people delivering Christmas presents to the needy. He shot one victim, who sustained a minor wound. The pair then carjacked and robbed a woman. He was sentenced for 18 crimes and would not be eligible for parole until the age of 112.

None of the victims of Bostic’s crimes oppose him being given a chance at parole.  The judge who sentenced him said that sentence was disproportionately harsh, and she favors giving him a chance at freedom.

One of the state representatives who has led the effort to help Bostic said he has clearly reformed.

He said, “He’s done so much while he’s been behind bars. Getting rehabilitated to the point of taking it upon himself paying for different college classes, getting several different degrees, writing many books, and trying to work with communities in need within our state so juveniles that might have been on the same path he was won’t make that same decision. I believe that is what we can all agree our criminal justice system is there for.”

Supporters of the change note there are more than 100 people in Missouri’s correctional facilities in similar situations.

The language becomes effective on August 28.

Missouri residents will soon have a chance to make their voices heard on the redistricting process. The bipartisan citizens commissions that are in charge of redrawing the boundary lines for the state House and Senate districts recently announced a series of public hearings around the state to take public input.

Both the House and Senate Independent Bipartisan Citizens Commissions met in the Missouri State Capitol Building on Tuesday, August 10 to elect their leadership and set dates and locations for future public hearings.

The public hearings will be held on October 18 (Springfield), October 19 (Kansas City), and October 21 (St. Louis). The House Commission also went ahead and approved locations for their following three public hearings on November 4 (Jefferson City), November 9 (Cape Girardeau), and November 10 (Kirksville). The Senate Commission has scheduled the same dates, but the locations will be confirmed at a later date.

The commissions are formed every 10 years for the purpose of redistricting the State House and Senate districts. The commissions hold public hearings to receive testimony or objections from any individual who wishes to participate in the process. The information provided at the public hearings will help the commission members in the creation of the new district maps.

The House and Senate Commission are assigned to work on their respective state district maps. There are currently 163 House districts and 34 Senate districts.

For more information on the commissions and the redistricting process, please visit: https://oa.mo.gov/budget-planning/redistricting-office/2020-Redistricting-Information.