The U.S. House of Representatives in Washington DC is composed of 435 members.  Eight of them come from Missouri.  In 1900, we supplied 18 members, but over the years other states have gained population faster than Missouri, so now we have only eight.  In northwest Missouri, we live in the 6th Congressional District, currently represented by U.S. Rep Sam Graves.  This is the year we redraw the lines defining those eight districts.

This week, the House Redistricting Committee worked on passing the new Congressional map.  I serve on that committee, and have spent some time in recent weeks drawing several possible maps that comply with all of the map-making rules, which is not a simple task.  First, every district must contain the exact same number of people based on the 2020 census – 769,364.  Adding a county, precinct, or census block into one district has a ripple effect on the other districts, so getting them all exactly right can be a puzzle.

A map also must comply with the federal Voter Rights Act, which says that areas that have a predominately black population cannot be split up.  For Missouri, this applies only to St. Louis City.  A map also has to be “compact and contiguous”, meaning each district must be drawn as tightly as is reasonably possible, and refrain from squiggly extensions.  And a map must try to keep similar community types together.  This means it would be frowned upon to draw urban downtown Kansas City into the same district as rural Harrison County.

The proposed map that was filed (HB 2117) is similar in layout to our current map, with slight adjustments made to account for population shifts.  There was an issue discovered during committee with the filed map, as it had Ray, Carroll, and Chariton Counties, which are north of the Missouri River, drawn into the 4th District, which, is usually entirely south of the river.  Ray, Carroll, and Chariton are a better fit in our 6th District, and so I offered an amendment to the bill to fix that, which was unanimously agreed to by the committee.  The committee then passed the whole map by a vote of 8-3.  The bill then moved to the Rules Committee, which I chair, where it passed by a vote of 8-4.  The map for HB 2117 can be found at https://house.mo.gov/billtracking/bills221/maps/Map.4875H.02C.pdf.

When we return after the MLK holiday, the entire House will have a chance to debate and amend the map again before sending it to the Senate for consideration. 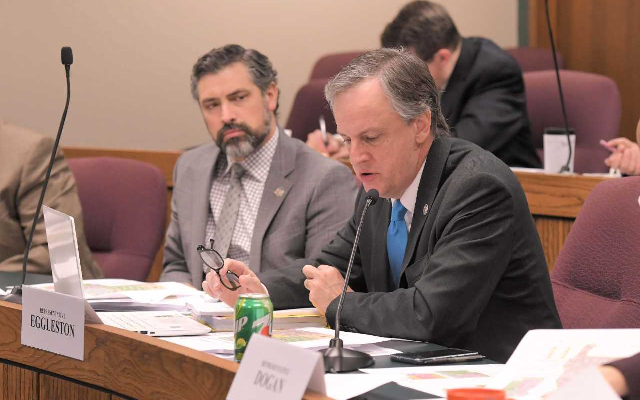 The House Elementary and Secondary Education Committee held a public hearing this week to consider pieces of legislation designed to give parents more control over what their children learn, and to prevent inappropriate curriculum from being taught in school.

Lawmakers took testimony on HB 1995, which would establish the Parents’ Bill of Rights for Student Well-Being. The legislation would require school districts to adopt a policy to promote parental involvement including procedures for objection to instructional materials. The bill requires the Department of Elementary and Secondary Education to develop specific forms that school districts must use for parents to opt out of instructional material, and for parents to be notified in advance whenever a teacher intends to teach a divisive or controversial topic.

“We need to send a very clear message that the state of Missouri, if we ever have to choose a side, we will always take the side of parents,” the bill’s sponsor told the committee.

The bill also establishes the Missouri Education Transparency and Accountability Portal to give access to every school district’s curriculum, source materials, and professional development materials.

During the hearing, the committee also heard testimony on HB 1474. The bill also creates a Parents’ Bill of Rights, but has additional language to prohibit the instruction of critical race theory in public and charter schools.

Specifically, the bill prohibits school districts, charter schools, and their personnel from teaching, using, or providing such curriculum or from teaching, affirming, or promoting any of the claims, views, or opinions found in the 1619 Project, which is a collections of essays on race. The bill does not allow curriculum that identifies people or groups of people, entities, or institutions in the United States as inherently, immutably, or systemically sexist, racist, biased, privileged, or oppressed.

The sponsor of the bill said his legislation is the result of parents who are concerned their children aren’t being taught a full, accurate picture of the nation’s history.

He added, “This bill in no way is trying to stop kids from thinking. I think it’s trying to prevent educators, prevent institutions from flooding kids with a certain train of thought, teaching them this is the only way to think about these situations.”

The committee completed the public hearing on both bills but has yet to bring them to a vote.

Finding the Best Environment for Children in Need (HB 1563)

Members of the House Emerging Issues Committee heard testimony this week on legislation that would require the state to put more effort into placing children in state custody with family members before placing them with strangers.

The sponsor of the bill thinks the state can do more to find family members who would be a good fit for each child.

House Bill 1563 would require the Missouri Children’s Division to make “diligent searches” for biological parents when a child enters state custody. In the case of an emergency placement, the division would search for grandparents. If they can’t be found or aren’t fit, it would then look for other relatives for placement within 30 days.

Members of the House Committee on Emerging Issues asked the sponsor whether his proposal would simply place burdens on overworked, underpaid members of an understaffed agency. He agreed those are concerns for the division but noted the state has resources that are available but not being utilized to the fullest.

The Central Missouri Foster Care and Adoption Association told the committee their agency, serving 24 counties, helped find family members for 34 children in state care in the last two quarters of the last fiscal year. The chief program officer for the association said it could help even more children, but the Children’s Division hasn’t being asking.

“We don’t receive the referrals like we should, for being a contracted agency. They’re paying for our service but they’re not always using it,” she said.

She believes as employees with the Division leave and are replaced, those new hires simply don’t know that her agency and others like it are available, or how they can be used.

She said similar agencies cover other parts of the state and her agency and others like it are simply more capable and have more resources than the Children’s Division for doing the kinds of searches the bill would require, and with compelling results.

She told the committee, “With our program that we run and are contracted with, it’s called 30 Days to Family, we’re able to find at least 80 relatives if not more. Our average this last year has 115 relatives, and we do that within 30 days.”

The committee completed the public hearing on the bill but has yet to put it to a vote.