THE EGGLESTON REPORT – WE STAND WITH UKRAINE

A lot of the normal work went on at the capitol this week, but our most profound effort was passing a resolution that showed our steadfast support of the people of Ukraine in their struggle against the unprovoked attack by Russia.  Unlike many of the bills we debate, this resolution received 100% support and numerous solemn speeches by House members who have served or who have family members serving in our military. Here is a partial excerpt of that resolution:

“WHEREAS, Ukraine is a sovereign and independent nation located in Eastern Europe and an ally, under a bilateral investment treaty, of the United States; and Russia…has launched an all-out invasion of Ukraine by land, air, and sea; … and Russia’s invasion of Ukraine is the largest invasion of a sovereign nation in Europe since World War II; and the combat is responsible for a Russian mortar attack on a children’s hospital that inflicted devastating loss of life; and Russia’s attack on Ukraine was unprovoked and unjustified; . . .”

“Now therefore be it resolved that we, the members of the House of Representatives… hereby:

(1) Proudly stand alongside Ukraine, its people, and its leaders during this horrific and unnecessary war and vow to support Ukraine and hold Russia fully accountable for its catastrophic decision to invade; (2) Condemn, in the strongest possible terms, Vladimir Putin’s violent attack on the people of Ukraine and strongly endorse swift and severe economic sanctions and stringent export controls…; (3) Urge Russia to immediately cease its violent, illegal, and immoral assault upon Ukraine, end the needless bloodshed, and return to diplomacy and the rules-based international order that has ensured peace and prosperity for so many; and (4) Recommend to the President of the United States and the United States Congress to reaffirm our country’s unwavering support for Ukraine’s freedom, sovereignty, and territorial integrity within its internationally recognized borders, extending to its territorial waters;…” 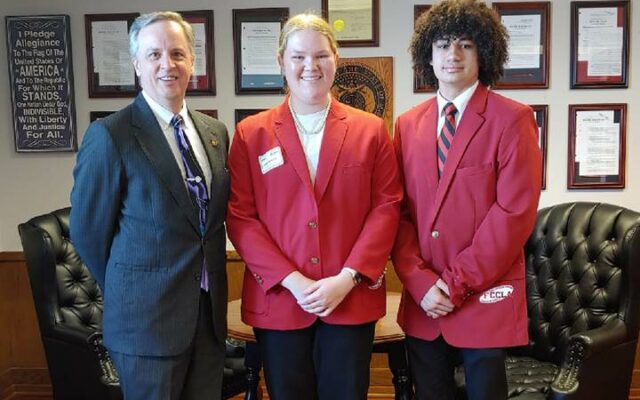 FROM THE CAPITOL NEWS DESK

The House has given initial approval to legislation that will expand and strengthen the rights of law-abiding gun owners in Missouri.

The core provision of the bill would allow a concealed carry permit holder to lawfully carry firearms on public transportation. It would also allow anyone with a permit to carry a firearm while traveling by bus. This bill would not apply to property of Amtrak or any partnership in which Amtrak engages.

The bill’s sponsor said, “It ensures the right of self-defense. It allows those who’ve undergone CCW firearms training to carry while aboard our public transportation systems that they fund with their own tax dollars.”

During the committee process, a provision known as Blair’s Law was added to the bill. Blair’s Law is meant to criminalize in state statute what’s known as “celebratory gunfire.”  It’s named for Blair Shanahan Lane, who was struck in the neck by a bullet fired from more than a half-mile away.

The provision’s sponsor said, “I don’t think that anybody goes out there with the intention of hoping that one of these bullets hurts someone or damages property … but I think we just have to educate people that these bullets do come down.”

During discussion on the House floor, lawmakers added an amendment to lower the age requirement from 19 to 18 years of age or older for a concealed carry permit. The amendment’s sponsor noted that 18 year olds are able to serve in the military and said, “The thought is that if you can die for your country, you ought to be able to – if you meet all the requirements, the training, the application, pay the fee – you ought to be able to have a conceal and carry permit in the state of Missouri.”

Another amendment added to the bill would remove the prohibition on the carrying of firearms in churches and other places of worship by a person with a valid concealed carry permit. The amendment’s sponsor told his colleagues that 40 other states have passed similar laws. The sponsor said, “This does make churches safer.” He added, “This would give protections to those people to defend themselves who have the training and have a CCW.”

The bill now needs a final vote in the House before heading to the Senate.

House members passed a bill this week designed to ensure the Kansas City Police Department receives the funding it needs. The House approved the bill in response to efforts by the city to remove $42 million from a previously-agreed-upon budget for the department.

The bill’s sponsor pointed out that existing state law makes it clear the department will receive 20 percent of the city’s general revenue, but Kansas City’s mayor and some city council members earmarked city revenues into other funds so that the general revenue fund would contain less funding than it should. While a Jackson County judge ruled the effort to defund the police department violated state law, the bill’s sponsor said it is important to improve existing statute to make certain similar attempts don’t occur in the future.

The sponsor said the goal of the bill is to ensure the city is not able to “artificially manipulate the general fund to manipulate therefore the budget for the Kansas City Police Department.”

HB 1986 clarifies state law to say that, for the purpose of cities calculating one-fifth of general revenue that must be allocated to funding a police department, general revenue of the cities that is devoted to special purposes or allocated to special funds by the cities’ charter and ordinances must be included in the calculation. The bill does exempt any tax or appropriation for funding first responders from the calculation.

The bill now moves to the Senate for consideration.

Members of the Missouri House took action to address the substitute teacher shortage that is causing major problems for schools around the state. The House gave first-round approval to legislation to create opportunities to increase the number of substitutes that are available to schools.

“This bill is really addressing an issue that’s very prevalent in our state today. Our schools are having a very difficult time acquiring substitute teachers,” said the bill’s sponsor. He added, “This bill just tries to open up the lanefor substitute teachers to make it as wide as possible.”

HB 2304 would provide a four year certificate for individuals who want to substitute teach. Under the bill, applicants for certification must complete a background check and also have at least 36 college hours or have completed a 20 hour online training. The bill also requires individuals to have a high school diploma or equivalence. Additionally, the bill provides an alternative route to certification for qualified individuals with technical or business expertise or Armed Forces experience and a superintendent sponsorship.

The bill requires another vote in the House before moving to the Senate.

The House has given first-round approval to legislation that would help prevent discrimination against school children based on their hair styles. House members gave bipartisan support to the bill, which is known as the Creating a Respectful and Open World for Natural Hair (CROWN) Act.

The bill’s sponsor told his colleagues that the legislation is designed to “fix the fact that students currently can be subjected to discrimination in the classrooms not based on the content of their character but on the hair that grows out of their heads naturally.”

The bill now requires another vote in the House before moving to the Senate.

Lawmakers gave initial approval to legislation this week that would protect businesses from government mandates that force them to foot the bill for new electric vehicle charging stations.

The bill’s sponsor said his legislation comes in response to a disturbing trend. He said, “There is a movement across the country to mandate that small businesses and shopping centers and churches and recreational facilities be required to install electric charging stations whenever they make improvements to their business.”

He noted that St. Louis County has an ordinance that says if you expand your parking lot or change the nature of your business, you have to add electric charging stations. He called the ordinance an “overreach of local government.”

“Building codes are meant for the safety of the citizens. They’re always there to make sure that whatever we build is something that will be done in a manner that is safe and secure,” said the sponsor. “These particular types of building codes are not for safety. They’re there to push forward a political agenda.”

The legislation needs another vote in the House before moving to the Senate.

Belief-based student groups on college campuses would have their rights protected under legislation approved this week by the Missouri House. Lawmakers gave initial approval to HB 1724 to protect these groups from being discriminated against because of their sincerely held beliefs.

“HB 1724 is designed to protect a long-standing practice in Missouri where belief-based clubs of all creeds and points of view are free to operate as registered student clubs and require that their leaders adhere to the group’s sincerely held beliefs,” said the bill’s sponsor. He added, “This is really just common sense. A pro-choice club should not be required to let a pro-life student serve as its president and a Baptist student club should not be required to let an atheist teach its bible studies.”

The bill requires another positive vote in the House before moving to the Senate.