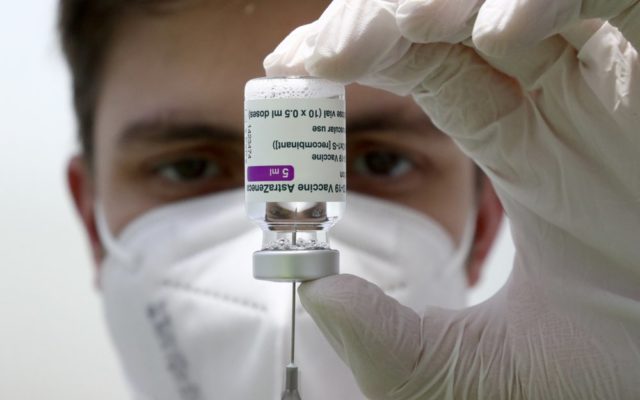 Medical staff prepares a syringe from a vial of the AstraZeneca coronavirus vaccine during preparations at the vaccine center in Ebersberg near Munich, Germany, Monday, March 22, 2021. (AP Photo/Matthias Schrader)

Seventeen Republicans serving in the Iowa legislature have sent an open letter to Trinity Health, the company that is requiring that staff in seven MercyOne hospitals in Iowa get the Covid vaccine by September 21st. The letter from the lawmakers says last week’s order has caused “confusion and distress” and it asks the health system to explain its rational for the decision. Senator Jason Schultz of Schleswig says he did not compose the letter, but signed on to send a message.

“I’d like to prevent other employers from making this same mistake,” Schultz says. Schultz would like to see Trinity Health rescind its vaccination mandate for employees at MercyOne hospitals in Clinton, Dubuque, Dyersville, Mason City, New Hampton, Primghar, and Sioux City. The requirement applies to the health clinics associated with those hospitals as well. Schultz says the letter makes clear that he and other lawmakers are paying attention, because they’re fielding complaints from constituents.

“How do we reverse what’s already happened and maybe stop permanently that employers can require a hastily approved and not properly tested product could be put into somebody unwillingly?” Schultz said. In a written statement last week, Trinity Health’s president said the vaccines are a proven way to prevent Covid-19 deaths and the health system is doing its part to end the pandemic by requiring employees get vaccinated. Schultz says he’s hearing other hospitals may issue the same vaccination mandate and may limit visitors and require face coverings for those who do visit patients during flu season.

“I’m starting to get hints that this is never going to go away until people start telling people to knock it off,” Schultz says. The letter includes nearly 70 questions of Trinity Health. The first asks the company to describe in detail how its vaccination policy will protect people. Republican Senators Jim Carlin of Sioux City, Jesse Green of Harcourt, Dennis Guth of Klemme and Brad Zaun of Urbandale co-signed the letter. The 12 Republican co-signers from the House are Terry Baxter of Garner, Brooke Boden of Indianola, Steven Bradley of Cascade, Mark Cisneros of Muscatine, Thomas Gerhold of Atkins, Jon Jacobsen of Council Bluffs, Anne Osmundson of Volga, Sandy Salmon of Janesville, Jeff Shipley of Birmingham, Henry Stone of Forest City, Cherielynn Westrich of Ottumwa and Skyler Wheeler of Orange City.