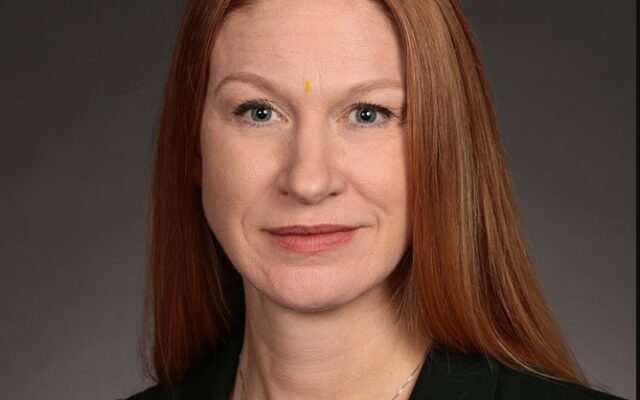 (Radio Iowa) Republican Senator Amy Sinclair of Allerton will be president of the Iowa Senate when the 2023 legislature convenes.

“I view the role of the president as stepping up and being the face of the people who’ve been elected to serve Iowa,” Sinclair says. “Being an arbiter of the law and the rules that we have in place for the Senate is a really important job and I will do it with fidelity.” The 34 Republicans who’ll be serving in the Senate next year met this (Thursday) morning and elected Sinclair to this new role — replacing current Senate President Jake Chapman of Adel was defeated in this week’s election. Jack Whitver of Grimes was re-elected by his colleagues to be Senate Majority Leader — so Senate Republicans will have leaders from urban central Iowa and rural southern Iowa.

“Having leadership in the Iowa Senate that reflects the face of Iowa is really important and I come from one of the most rural parts of the state,” Sinclair says. “I have all or part of nine different counties, which may well be the largest district in the state.” Sinclair’s district includes the town of Clio (KLY-oh), which has around 70 residents.

“My largest towns are in the 5000 to 6000 to 7000 range and those are our urban centers and so having a voice for people who are coming from a place where it’s not uncommon to put 40,000 miles on your car in a given year just going to work and taking your kids to school,” Sinclair says, “so being able to bring that voice to a leadership role to our caucus I think will be a phenomenal improvement for our state and the folks that I represent.” Sinclair says the G-O-P’s 2023 legislative agenda will be centered around families and their jobs.

“And do those things that just make the lives of Iowans better,” Sinclair said, “and that tax reform, that is a solid education system and just regulation and rule of law that makes sense and advances the family unit.” Sinclair has been chair of the Iowa Senate Education Committee. She’s also guided several major pieces of legislation through senate debate since she was first elected in 2012. HOUSE Republicans also met today (Thursday) and reelected Pat Grassley as Speaker and Matt Windschitl (WIND-shit-ull) as Majority Leader.