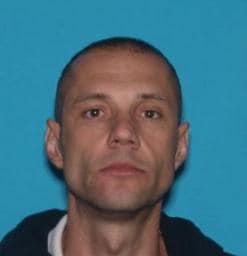 Authorities in Clinton County are on the hunt for a fugitive that led them on a vehicle and foot chase early Sunday morning.

According to information from the Clinton County Sheriff’s Office a deputy was involved in a vehicle pursuit in the city of Cameron that ultimately ended in a foot chase near South Lathrop and West Cornhill streets. The suspect in the chase, Cameron resident Jamison Shepard, was able to evade capture.

Authorities add that narcotics were found that are believed to have belonged to Shepard.

Shepard is described as being a 36-year-old white male, standing six feet one inch tall and weighing about 164 pounds. He has brown eyes.

Anyone with information on Shepard’s whereabouts should call the Clinton County Sheriffs Office at 816-539-2156 or contact your local law enforcement.