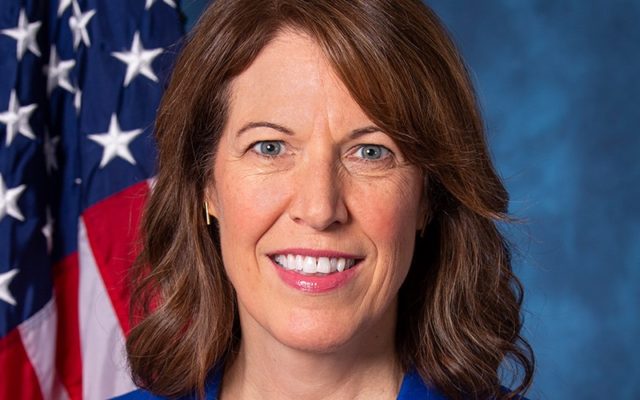 (Radio Iowa_ Congresswoman Cindy Axne, a Democrat from West Des Moines, will seek re-election for a third term in the U.S House in Iowa’s new third congressional district.  Axne, who had been considering a run for governor, says she took some time to make the decision because she wanted to assess where she could “make the most impact” for Iowa.

“What does redistricting look like and how are we going to make sure that Iowa has the best support for what we need? And it took a minute and really look at all these things in conjunction and make sure I made the right decision,”Axne says. Axne defeated incumbent Republican Congressman David Young in 2018 and she won a 2020 rematch against Young.

“My goal, when I started in my first primary, was to to make sure that I represented Iowans in the best way I thought I could, to make sure that we do three things: uld: put money in their pockets, give our families opportunity and ensure that states like Iowa got to operate on a level playing field with other states,” Axne says. “…I still feel that the best way to address those issues is within the United States Congress.” Commercials critical of Axne have already begun airing in Axne’s current district. Axne says that shows she’s in the number one targeted race for Republicans in 2022.

“This job, for me, is about standing up for Iowans,” Axne says. “That means making sure that we have what they need, but it also means protecting our democracy and I play a pivotal role in both of those areas and I intend to make sure that Iowans have the best voice out there.” Axne made her announcement during this (Friday) morning’s taping of Iowa Press which airs tonight (Friday) on Iowa P-B-S. Axne’s decision follows this week’s announcement from Republican Congresswoman Mariannette Miller-Meeks, who — like Axne — lives in the new third congressional district, but will seek reelection in the new first district. Four other Republicans have announced they intend to run in the new THIRD district. Iowa G-O-P chairman Jeff Kaufmann says Axne is a big government Democrat who has spent the past two years cozying up to Nancy Pelosi and Joe Biden. Axne endorsed Biden before the 2020 Iowa Caucuses and she says she’d be happy to have Biden campaign for her in Iowa in 2022.

“Once we get the infrastructure bill signed into law, the Build Back Better bill signed into law, next year folks are seeing expansion of those child care centers, they’re seeing more money in their pocket because of the earned income tax credit or the child tax credit…when those pieces are put in place and we start moving those agendas forward, we’re going to overcome some of the false narratives that we’re hearing right now,” Axne says. Axne is the only Democrat in Iowa’s congressional delegation. She’s also among the few House Democrats who won last year in a district that President Trump carried. Her margin of victory in 2022 was about one-and-a-half percent.

Axne had been pondering a run for governor — or seeking reelection to the U.S. House. She announced her decision this morning.