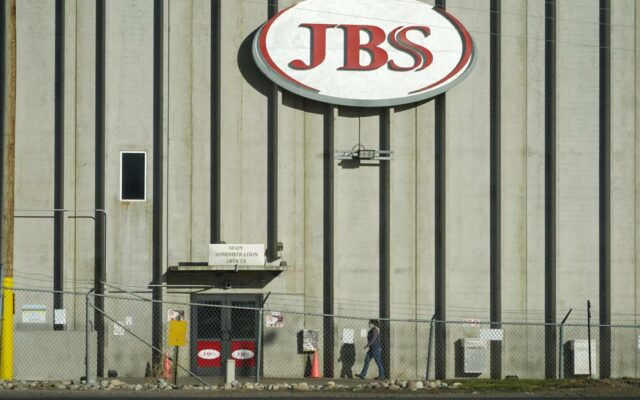 FILE - A worker heads into the JBS meatpacking plant Monday, Oct. 12, 2020, in Greeley, Colo. Meatpacking giant JBS has agreed to a $52.5 million settlement in a beef price-fixing lawsuit, Thursday, Feb. 3, 2022, that some say supports their concerns about how the lack of competition in the industry affects prices. Colorado-based JBS didn’t admit any wrongdoing as part of the settlement and a spokeswoman said the company will continue to defend itself. (AP Photo/David Zalubowski)

OMAHA, Neb. (AP) — Meatpacking giant JBS has agreed to a $52.5 million settlement in a beef price-fixing lawsuit that some say supports their concerns about how the lack of competition in the industry affects prices.

Colorado-based JBS didn’t admit any wrongdoing as part of the settlement, and company spokeswoman Nikki Richardson said JBS will continue to defend itself against other plaintiffs in the case, but she said JBS decided the settlement was “in the best interest of the company.”

A federal judge reviewed the settlement at a hearing Thursday and will rule later whether to approve it. The plaintiffs’ attorney, Dan Gustafson, said the deal could serve as an “icebreaker” in the case that could lead to additional settlements in the case that also involves Tyson Foods, Cargill and National Beef. Those three companies, along with JBS, control more than 80% of the U.S. beef market.

Similar settlements and lawsuits have previously been announced in the pork and chicken processing businesses.

The beef lawsuit filed by grocery stores and wholesalers accused the companies of working together to suppress the number of cattle being slaughtered starting in 2015 to help drive up the price of beef.

The giant beef processors have argued that supply and demand factors, not anticompetitive behavior, drive the price of beef and the amount ranchers receive for cattle but the industry’s practices have been questioned by the White House and Congress.

The Biden administration has focused on finding ways to increase competition in the meat processing industry to help reduce food prices, and the USDA plans to invest $1 billion to help independent slaughterhouses expand. The Justice Department has been investigating potential price fixing in the industry at least since 2020, but it hasn’t provided any updates on its findings.

On Thursday, the USDA and DOJ launched a new website to make it easier for farmers and ranchers to report any concerns about anticompetitive behavior in the industry.

U.S. Sen. Chuck Grassley, who has proposed requiring beef processors to disclose more about the prices they pay ranchers to bolster competition, said the settlement validates the concerns he hears from ranchers even though it represents just a “spit in the ocean compared to JBS’ record profit throughout the pandemic.”

“If there were any doubt about the shenanigans big packers play to line their pockets at the expense of consumers and independent producers, look no further than JBS’ $52.5 million settlement in price-fixing litigation,” said Grassley, the Iowa Republican.

The head of the National Cattlemen’s Beef Association trade group, CEO Colin Woodall, said the settlement reinforces the need for the Justice Department to wrap up its investigation.

“Cattle producers do not have years to wait for the government to determine whether there has been wrongdoing — we demand answers now,” Woodall said.