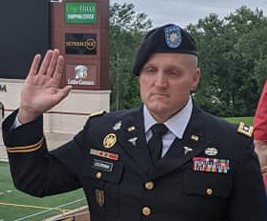 LTC Doornink is a 1999 graduate of Cameron High School and a 2004 graduate of Missouri Western State University, where he played football.

Lieutenants Colonels are commissioned officers in the United States Army.  They receive their commission upon appointment by the Secretary of the Army.
Their primary function of Lieutenant Colonels is to serve as commanders of battalion-sized elements. Although, they can also serve as staff officers at the brigade level or above, aiding in the planning, resourcing, and functioning of units.
Lieutenant Colonels serving as commanders of battalions are the final authority on everything that occurs in the battalion, recognized as responsible for everything the battalion does or fails to do.
Events Calendar