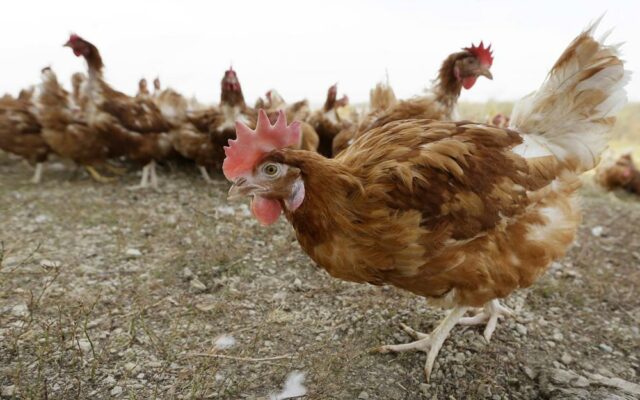 FILE - In this Oct. 21, 2015, file photo, cage-free chickens walk in a fenced pasture at an organic farm near Waukon, Iowa. The confirmation of bird flu at another Iowa egg-laying farm will force the killing of more than 5 million chickens, officials said Friday, March 18, 2022. Spread of the disease is largely blamed on the droppings or nasal discharge of infected wild birds, such as ducks and geese, which can contaminate dust and soil. (AP Photo/Charlie Neibergall, File)

HARRISON COUNTY, MO – A case of highly pathogenic avian influenza, commonly referred to as HPAI, or bird flu, was confirmed in a backyard non-poultry flock in Harrison County last week. The virus is transmitted from bird-to-bird through fecal droppings, saliva, and nasal discharges. It can affect poultry and wild birds.

The Missouri Department of Agriculture says HPAI is a serious disease and requires rapid response because it is highly contagious and often fatal to chickens. The case in Harrison County is the 14th of 15 identified in Missouri. A case was found in Gentry County in March. The other 13 cases are in central and southern Missouri.

Officials with the Department of Agriculture say the affected birds have been quarantined and will not affect the food supply. Chicken and other poultry products are safe to eat if they are properly handled and cooked.