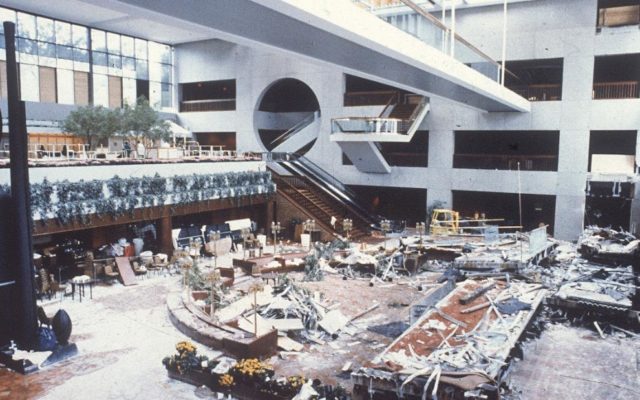 Two skywalks that spanned the second and fourth floors of the Hyatt Regency Hotel in Kansas City, Missouri, lie in ruins after collapsing on July 17, 1981.

KANSAS CITY, Mo. (AP) — Kansas City, Missouri, on Saturday marked the 40th anniversary of one of its greatest tragedies with a release of white doves.

The Kansas City Star reported that about 100 people gathered at the Skywalk Memorial Plaza to remember the 114 people killed when disaster struck the Hyatt Regency Hotel on July 17, 1981.

Hundreds of people had gathered in the hotel lobby for that night’s “tea dance” when skywalks collapsed. In addition to those killed, more than 200 people were injured.

Brent Wright told the crowd that he is among the “members of a club we did not want to join.” He lost his mother and stepfather in the collapse. Wright is now president of the Skywalk Memorial Foundation, a nonprofit dedicated to honoring the victims.