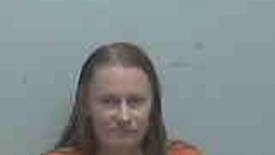 A Chillicothe woman who ran from police was arrested Thursday and is now facing felony methamphetamine charges.

The Livingston County Sheriff’s Office says deputies joined Chillicothe Police in the search for a vehicle that had fled officers at about 9:20 P.M. Wednesday. The deputies later located the suspect vehicle which had run off the roadway on Livingston County Road 238, but the driver had fled the scene. Those deputies report finding a methamphetamine smoking pipe and a cell phone in that vehicle.

Officers also were able to locate security footage that showed a single female suspect fleeing the scene, and were able to identify a suspect.