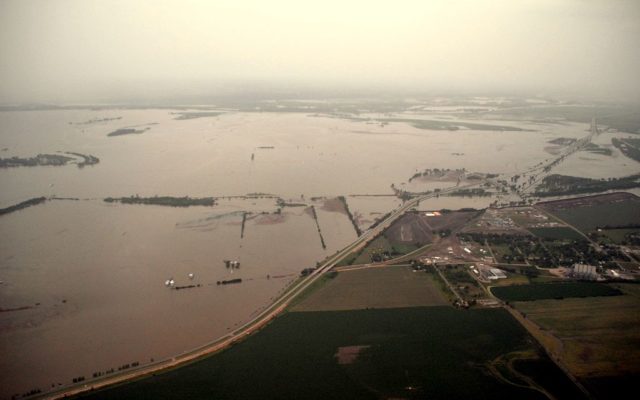 Aerial view of Hamburg during flooding. Photo by US Army Corps of Engineers.

(Radio Iowa) The U.S. Army Corps of Engineers is agreeing to consider changes to levees along the Missouri River in an effort to avoid a repeat of recent major floods. State officials in Iowa, Kansas, Missouri and Nebraska worked together to suggest changes to reduce the risks following the 2019 flood. Colonel Travis Rayfield, commander of the Corps’ Kansas City District, says federal law restricts what they can do when rebuilding levees that were broken by floodwaters.

“When you do a study, that will allow us to, in our verbiage, we do a study, which is really an informal plan, will give us a chance to relook how we’ve aligned levees and structural solutions,” Rayfield says. “So what does that mean? It gives us our first chance to maybe move levees or other physical structures to let the water go through in a better manner.” Two southwestern Iowa towns, Hamburg and Pacific Junction, were heavily damaged in the 2019 flood, with Hamburg alone losing more than 70 homes. Rayfield says the new agreement comes in two parts, and the first will study the river’s flow from South Dakota all the way to St. Louis.

“We’re looking systematically at the lower 730 miles of the Missouri River,” he says. “That’s to see how much water is moving through, where it comes from and how it goes. That’s the system plan.” Rayfield says the Corps will also work to find spots where the water is not moving adequately downstream, like in Holt County in northwest Missouri. Rayfield says floods start and end locally, but this new arrangement is about coming up with solutions all the way up to the federal level.

“We need solutions for how we want that water to move through in a flood that the local government can support, the state government can support and the federal government can support,” Rayfield says. “Really, that’s what this partnership is about, is understanding what will work in this specific footprint informed by the new data and science we got from the most recent floods.” The Corps of Engineers will factor major floods in 1993, 2011 and 2019 into the study. Under current federal law, the Corps is only allowed to rebuild levees.