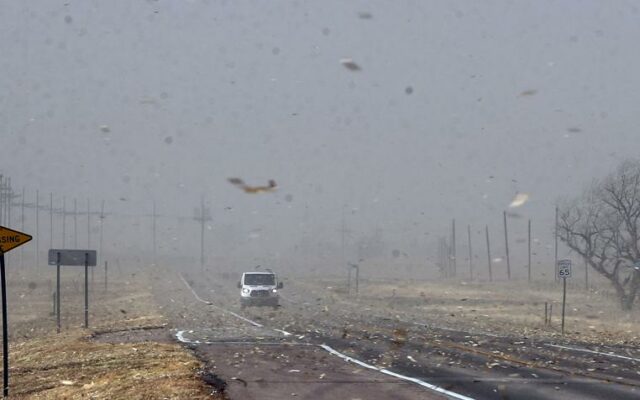 Debris from nearby farm fields swirls around on Highway 400 between Mullinville, Kans., and Dodge City on Wednesday, Dec. 15, 2021. (Travis Heying/The Wichita Eagle via AP)

(Radio Iowa) A massive storm system produced tornadoes and damaging straight-line winds as it swept across the state late Wednesday afternoon and evening. According to the Greene County Sheriff, a tornado cut through the western part of the county, with significant damage in Jefferson. The storm wreckage in the small Plymouth County town of Kingsley was so severe that only residents were allowed in the town overnight, a shelter was set up in nearby Piersen and school has been cancelled today (Thursday) in the Kinsley-Piersen school District. Sioux City — as with many locations around the state — set a record high temperature for the 15th of December, then the storm moved in. Woody Gottburg reports.

“Tornadoes were confirmed near Salix and Bronson in Woodbury County and wind damage was reported in Sergeant Bluff. Traffic was detoured on Highway 20 east of Lawton when the strong winds took down power lines across the east and westbound lanes of the roadway. Large hail pounded vehicles on Interstate 29 near Sloan. An 82 mile an hour wind gust was recorded at Sioux Gateway Airport in Sioux City.”

As the edge of the storm moved into western Iowa, a line of railcars loaded with coal was blown over in Council Bluffs and 83 mile an hour wind gusts were reported in nearby Missouri Valley AND in the southwest Iowa town of Sidney.

Corey Harguth, a meteologist with K-I-C-D in Spcncer, reports a building was picked up and deposited on Highway 10 near Sutherland.
In the five o’clock hour, westbound Interstate 80 was blocked by semis that were tipped over in Cass County from a tornado near Atlantic. Just before 7 p.m., a wind gust of 83 miles an hour was reported at Mason City’s airport. As the storm moved into the eastern half of the state, hail was reported in some locations and the winds remained strong. A gust of 82 miles per hour was recorded at Ottumwa’s airport just before 8 p.m. By 9:30 last (Wednesday) night, about 146-thousand Iowa homes, businesses and other electric customers did not have power. Radio Iiowa’s O. Kay Henderson reports.

“According to an update from MidAmerican Energy at 10 p.m., power was knocked out for 48-thousand of its customers, with most of the outages in southwest Iowa — especially the Council Bluffs area — and in Fort Dodge and the Des Moines metro. The company said repairs were difficult because of the extent of the damage and because wind speeds continued overnight. It could be 72 hours before some MidAmerican customers have electric service restored.”

The National Weather Service issued more than two dozen tornado WARNINGS as the storm system moved from west to east across Iowa. The strong southwest winds also carried smoke and dust into Iowa that came from wildfires in Kansas.