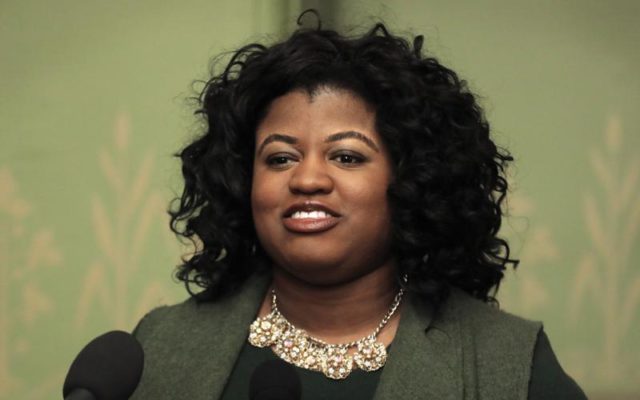 FILE - In this Jan. 23, 2019 file photo, former Democratic candidate for Iowa Secretary of State Deidre DeJear speaks during a news conference, at the Statehouse in Des Moines, Iowa. A Davenport attorney has been appointed to serve on a state commission that will conduct public hearings about new maps that will be drawn for legislative and congressional districts later this year. Jazmin Newton will replace Deidre DeJear of Des Moines on the Temporary Redistricting Advisory Commission, Senate Democratic Leader Zach Wahls said Tuesday, July 6, 2021. (AP Photo/Charlie Neibergall)

(Radio Iowa) Democrat Deidre DeJear, who ran for secretary of state in 2018, is taking the first steps toward launching a run for governor in 2022.

DeJear is a small business owner from Des Moines. She’s has formed an exploratory committee to raise money. DeJear is starting a listening tour of the state with an event tonight (Monday) in Des Moines with small business owners and stops in six eastern and south central Iowa cities this week as well. In 2018, DeJear was the first Black Iowan to be nominated for statewide office by a major party. She lost to Republican Secretary of State Paul Pate.