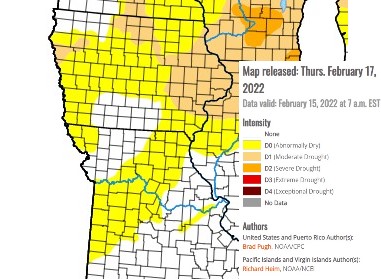 Drought conditions have spread over the winter with 61 percent of the area being abnormally dry.

In northwest Missouri, Atchison, Holt, Nodaway and Andrew Counties are at D-0, which is abnormally dry. Counties in the far southwestern reach of Iowa are in the abnormally dry intensity category as well.

Drought is not expected in the National Weather Service outlook for Spring, however there is concern is for “flash drought” which is the quick onset of drought conditions. Flash droughts have a higher than normal chance of occurring after a La Nina winter which we are currently experiencing.