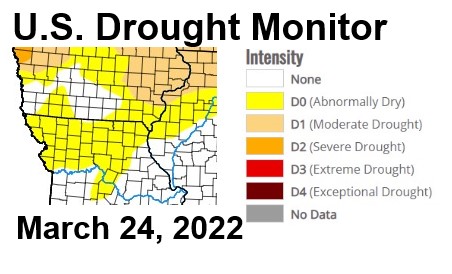 AMES, IA (Radio Iowa) – The new map from the U-S Drought Monitor shows soil conditions in Iowa are improving, slightly, thanks to rain and snow in the past week. The broader picture for the Midwest is worsening, however, with drought conditions expanding over much of the Northern Plains. Meteorologist Dennis Todey, director of the U-S-D-A’s Midwest Climate Hub in Ames, says some crops in the region are already stressed.

“We have, obviously, great concerns for winter wheat right now because that area that is in drought and has been in drought extending is much of that winter wheat area from the Central Plains south,” Todey says. “Still a lot can happen but there’s been damage done to it because of drought and some other things.” The worst of the drought in our state is isolated in far west-central Iowa, and for the region, the driest areas are also to the west.

“Most of the major drought areas are just west of the major corn and soybean growing areas but it’s right on the edge,” Todey says, “and the areas that are dry and hot are on the western part of the Corn Belt, so we do have risk there.” Todey notes much of South Dakota and Nebraska saw less than half of the normal snowfall for the winter. He says there is a big contrast in conditions across the Midwestern crop production areas.

“You have a two sides issue with crop production: potential for it being too dry in the far west and the potential for it being too wet — at least as we get started — in the east,” Todey says. “In between is kind of an ‘unknown’ area, Iowa, Illinois, we have some dry areas but we can work with those if we get rainfall.” The latest map from the U-S Drought Monitor shows roughly 41 Iowa counties are in the category of “abnormally dry,” improving from 45 counties last week. The new map shows 34 counties are in “moderate drought,” versus 36 a week ago. Large sections of Monona and Woodbury counties are listed as “severe drought,” that’s unchanged, while there are around 22 counties where soil moisture levels are considered “normal,” an improvement from 16 counties last week.
(Jerry Oster, WNAX, Yankton)