‘Field of Dreams’ Game is in Three Weeks 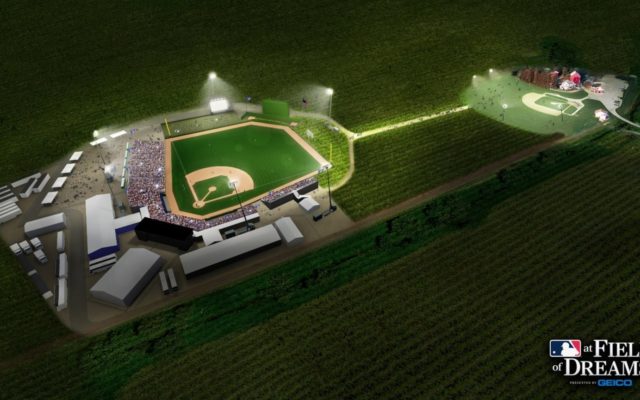 (Radio Iowa) The highly-anticipated Major League Baseball game at the Field of Dreams Movie Site is coming up on August 12th and Dyersville is hosting a “Beyond the Game” festival that starts the day before. Dyersville Chamber director Karla Thompson says there’s been a surge of interested in the area after the game was announced.

“We talk to tourists all the time that (say) they’ve never been there, it’s on the bucket list and this is the year they’re going to come to the Field of Dreams,” Thompson says. The Dyersville Chamber has been fielding lots of calls about how to register for game tickets, which are being awarded through a lottery to Iowa residents.

“Even if they don’t get tickets, they can come to our festival,” she says. “…We’re going to be the official viewing party for that game. We’re going to have that in the city square, which is right downtown in Dyersville.” The game will be played on a newly-constructed, eight-thousand seat ballpark that’s next to the baseball diamond that was seen in the 1989 movie. The site is a few miles outside of Dyersville. In town, there’s an “If You Build It” exhibit about the making of the movie. Thompson says an “Iowa Zone” will be set up during the two-day festival so tourists — and locals — can learn more about the state as a whole.

“Businesses and organizations are going to be there, giving out samples or promoting their product or just kind of showcasing or providing an education opportunity, so like John Deere, Blue Bunny, Musco Lighting — those all kind of represent Iowa,” Thompson says. Musco Lighting, based in Oskaloosa, has installed lighting systems at several sports arenas major league ballparks, including Kaufmann Stadium in Kansas City. Thompson is looking for volunteers to help out during the festival, including at the “Kid’s Zone” in Dyersville where there will be all sorts of activities — and even a pitching contest.

“It takes a village to put this on,” Thompson says, “so we’re kind of excited.” The Field of Dreams game was originally scheduled for last summer, but was postponed due to the pandemic. The Chicago White Sox will be the home team and their game against the New York Yankees will count as a regular season game. From now through this Friday, fans with an Iowa zip code can register in a lottery for tickets. Winners will be notified on August 2nd if they won the chance to buy two tickets to the game.
(Janelle Tucker, KMCH, Manchester)