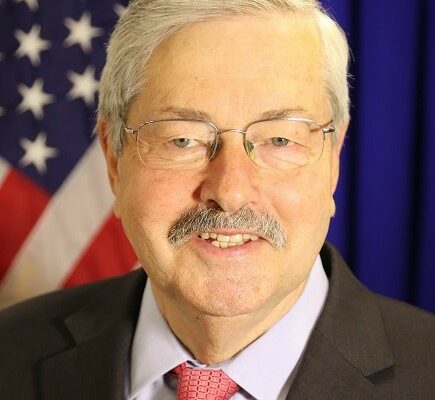 “I don’t intend to do this for a long time,” Branstad says, “but I intend to do it, say, at least for a year.” In October of each year the foundation presents the World Food Prize and it’s 250-thousand dollar award to people at the forefront of efforts to improve the quality, quantity and availability of food.

“I’ve seen all the international leaders who have received this award,” Branstad says. Branstad, who served as U-S Ambassador to China, was governor when Des Moines businessman John Ruan donated the seed money for the World Food Prize and its headquarters in Des Moines. Norman Borlaug, the Cresco native who won the 1970 Nobel Peace Prize for his research that developed high-yielding wheat, took the lead in creating the World Food Prize in 1986.

“I knew both John Ruan and Norman Borlaug very well. I have the greatest respect for what they did and I want to maintain that legacy,” Branstad says. “Also, I’m a farm kid, from Iowa, and I want Iowa to be recognized as the local for this Nobel like prize for food and agriculture.” Branstad, who is 76, is America’s longest serving governor. He was U.S. Ambassador to China from mid-2017 to the fall of 2020. As president of the World Food Prize, Branstad will be a lead fundraiser and host of the annual World Food Prize symposium. The event attracts global leaders in research, government and commerce to Des Moines for discussions about advances in food production and food security. Barbara Stinson, who had 30 years of experience in environmental policy and business management, stepped down last week after three years as president of the World Food Prize.