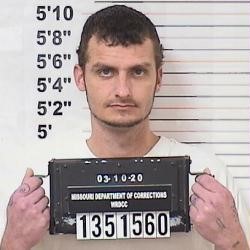 More information has been released by the Gentry County authorities about the assault against a deputy Wednesday night.

In a probable cause affidavit filed with the court, an officer with the Gentry County Sheriff’s Office reports that a report was made about a truck driving erratically on U.S. Highway 136. The officer was able to locate the vehicle and attempted a traffic stop. The officer says the driver attempted to evade the stop and ran another vehicle off the roadway while exceeding the speed limit by at least 30 miles per hour.

Law enforcement were able to apprehend the suspect and provide first aid for the shrapnel wounds.

Court records indicate Cline is on felony probation in Gentry County for possession of a controlled substance. He served a 120-day shock period of incarceration last year in the Missouri Department of Corrections. Cline has a pending felony in Nodaway County which is set for June 7th. He is now being held in the Daviess-DeKalb Regional Jail. Bond has been denied.