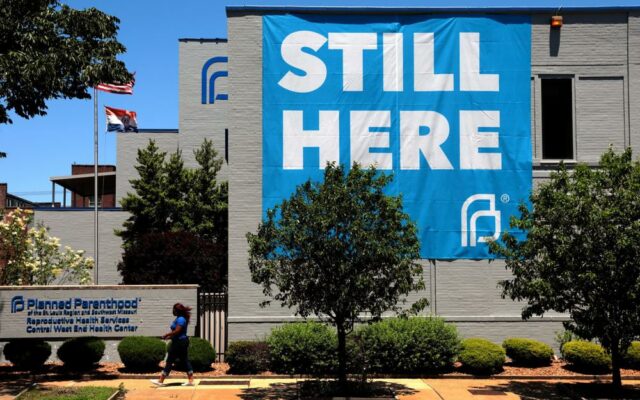 FILE - In this May 29, 2020, file photo, a banner hangs on the side of the Planned Parenthood building in St. Louis. The Missouri House is advancing a bill to defund Planned Parenthood and put more restrictions on abortions. The GOP-led House gave the measure initial approval in a voice vote Tuesday, March 29, 2022. (Robert Cohen/St. Louis Post-Dispatch via AP, File)

The House gave the measure initial approval in a voice vote Tuesday. It needs another House vote to move to the Republican-led Senate.

The measure also bans fetal-tissue donation and would allow family members to file wrongful death lawsuits if babies are born after an abortion and then die.

Planned Parenthood currently is reimbursed for providing health care for low-income recipients of government health insurance. Republican lawmakers are trying to block any public funding from going to Planned Parenthood, including clinics that do not provide abortions.

Abortion opponents in Missouri have for years sought to stop any taxpayer money from going to Planned Parenthood. But legislators struggled with “loopholes” that allowed Planned Parenthood clinics that provide other healthcare to continue receiving funding.

Lawmakers were able to stop money from going to Planned Parenthood in the 2019 fiscal year by forgoing some federal funding to avoid requirements that the clinics be reimbursed if low-income patients go there for birth control, cancer screenings and other preventative care. Missouri instead used state money to pay for those services.

But the Missouri Supreme Court in 2020 ruled that lawmakers violated the constitution by making the policy change through the state budget, forcing the state to reimburse Planned Parenthood for health care provided to Medicaid patients.