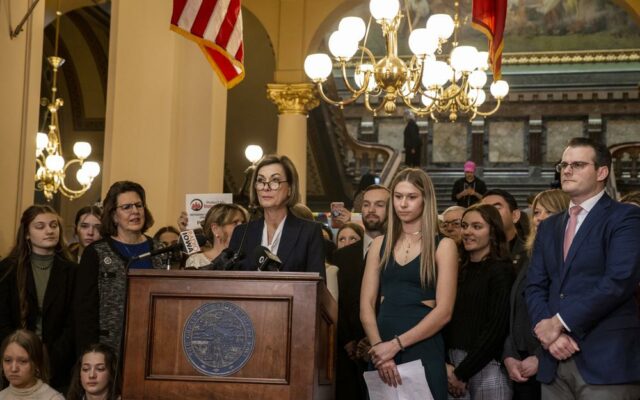 “Thank you all for being here as we celebrate a victory for girls’ sports in Iowa,” Reynolds said. Reynolds began publicly advocating for policy last April. Now that the law is in effect, athletes who identify as girls or women, but were identified on their birth certificate as male may be kicked off teams today (Thursday). Reynolds say it’s unfair for girls and women to compete against biological males who might win championships or scholarships instead of their female competitors.

“Nothing could be more straightforward and common sense,” Reynolds says. “No student will be prevented from playing a sport that matches his or her biological sex or a sport designated as co-ex. As a woman, a mother of three daughters and now a grandmother of three young girls, it worries me that this bill is needed at all. It’s hard to imagine that anyone who cares about the rights of women and young girls could support anything less.” Reynolds invited Ainsley Erzen of Carlisle to speak at the event. Erzen, a high school senior, holds the national record in the 800-meter race and she has lobbied for the bill.

“Because of the courage of all those who worked so hard to make this a reality, today we get to send a crucial message to all Iowa girls now and all those to come in the future, a message girls today so rarely get to hear,” Erzen said, “the message that women are so much more than a hormone level, that the things girls love is worth protecting and their hard work and dedication is recognized.” Groups that oppose the law say it’s discriminatory and targets a group of people who already face isolation and bullying. Iowa Safe Schools executive director Becky Smith held a Trans Flag of Remembrance behind the governor as the bill was signed.

“What we’re really worried about right now is the feeling of safety and support of our students, whether or not a student is kicked off a team or no longer feels safe in going to practice,, we really just want to make sure that students know that we hear them, we see them and there are community members that do not support this legislation,” Smith says. Ten other states have adopted similar laws — and lawsuits have been filed in four states to try to block the policies. Smith says the governor’s signature on Iowa’s new law opens the door to similar legal challenges against Iowa school districts.

“Transgender students are here,” Smith says. “…Despite the fact that their rights are being infringed upon by the passage of this bill we stand with them, we have not forgotten them and the fight continues for LGBTQ youth across the state.”