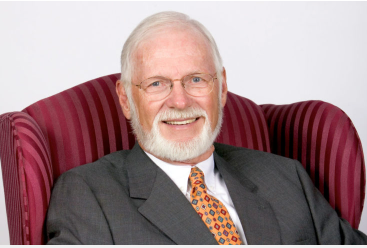 The University says Higdon’s contributions were significant and he made a substantive impact on campus life. He oversaw development of Graceland’s School of Nursing and its campus in Independence, Missouri, and introduced the “Bear Pit” sessions of open public dialogue with students. He also oversaw the launch of Graceland’s first master’s program and the purchase of SkillPath Seminars.

Higdon has the distinction of being the only Graceland president to serve immediately following both his father and his wife as president of the University. His father, Earl Higdon, served as Graceland’s president prior to his first term in 1966, and his wife, Barbara Higdon, served as Graceland’s president prior to his second term in 1992. Bill was granted president emeritus status in 2004 by Graceland’s board of trustees. His daughter, Beth, currently serves as Graceland’s Executive Director for Institutional Effectiveness.After retiring from active ministry in 1992, he returned to Graceland for five years before his retirement in 1997. That year, the University completed an extensive renovation of its signature administration building, which was renamed Higdon Administration Building in honor of Bill, Barbara, and Bill’s father, Earl.

The Graceland flag on campus will fly at half-staff this week to honor Bill’s memory. Memorials can be sent to either Graceland University, Lamoni, Iowa 50140, or Outreach International, 112 W 18th St, Kansas City, MO 64108.