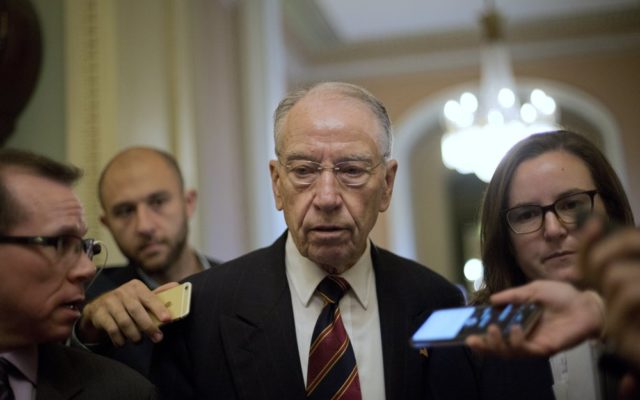 Sen. Chuck Grassley, R-Iowa, walks past members of the media as he heads to the Senate Chamber floor on Capitol Hill in Washington, Tuesday, Sept. 18, 2018. (AP Photo/Pablo Martinez Monsivais)

(Radio Iowa) President Biden is calling on Congress to intervene to avoid a nationwide railroad strike that’s looming in early December and Iowa Senator Chuck Grassley says he anticipates there will be quick action by federal lawmakers. Grassley, a Republican, says a rail strike would be “devastating” to the country’s economy, costing perhaps two-billion dollars per week, and it couldn’t come at a worse time for Iowa’s farmers.

Grassley says, “You’ve heard ag producers in Iowa and all across the country stating their dependence on rail to move inputs, grains and other ag products.” Resolving the labor dispute and preventing the rail strike, in Grassley’s words, is “something that must be done.”
“The administration’s presidential emergency board has worked to resolve this dispute, but thus far, the president, by his own actions, has only managed to delay a strike from early October until now, I think December 9th, so the situation is not resolved.” Grassley says this could’ve and should’ve been done well before now, but he blames Democrats for being “too focused on a partisan spending agenda.” A Senate vote is also expected this week on the Respect for Marriage Act, which backers say would protect same-sex marriage rights while also providing a layer of religious freedoms. Grassley has opposed the measure.

“The bill has no practical impact on the status quo of these marriages, but it would expose religious organizations and individuals to new legal jeopardy,” Grassley says. “We’re going to have three votes this afternoon on amendments dealing with the religious issue.” Grassley says he does not expect those amendments to be adopted, but if they were to pass, he says he might change his mind and consider supporting the broader piece of legislation.