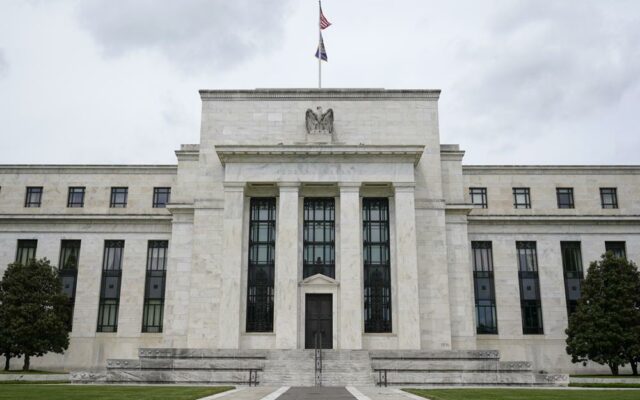 FILE - This May 4, 2021, file photo shows the Federal Reserve building in Washington. The Federal Reserve on Friday, Feb. 18, 2022 formally adopted sweeping new rules that will limit the ability of its top officials to invest in financial markets, a change intended to prevent . (AP Photo/Patrick Semansky, File)

(Radio Iowa) The Federal Reserve meets this week and is expected to raise the interest rate to try to cool down inflation — and Iowa Senator Chuck Grassley says the move is long overdue.

“They’re about a year late, at least eight months late, realizing how bad inflation was going to be,” Grassley says. When the economy slows, the Federal Reserve typically lowers interest rates to spur growth. The rate has been around zero since March of 2020. All signals point to a quarter of a percent increase.

“Inflation’s a very important issue to Iowa families because I hear about it all the time from Iowa families,” Grassley says, “so I’m glad that The Fed is finally waking up.” Grassley supports not only the rate hike, but the expected move to start reducing the amount of bond debt the Federal Reserve took on as a way to spur the economy during the pandemic.

“They have ballooned their balance sheet from $4 trillion prior to the pandemic to about $9 trillion and they need to back that off,” Grassley says. “I’m not saying do it dramatically, but they need to back that off in conjunction with the interest rates.” Federal Reserve chairman Jerome Powell has been nominated for another term and Grassley says he’ll likely vote for Powell to stay on.

“The alternative that they were suggesting, the person that’s going to be voted in as vice chair, would be worse,” Grassley says. “I approved of his policy until he started talking about inflation being transitory and even after it looked like it wouldn’t be transitory, they still talked about it.” Grassley, a Republican, says there is one other Biden nominee for the Federal Reserve that he’s likely to support. It’s Lisa Cook, an economist from Michigan State University, who would be the first black woman to serve as a Federal Reserve governor.