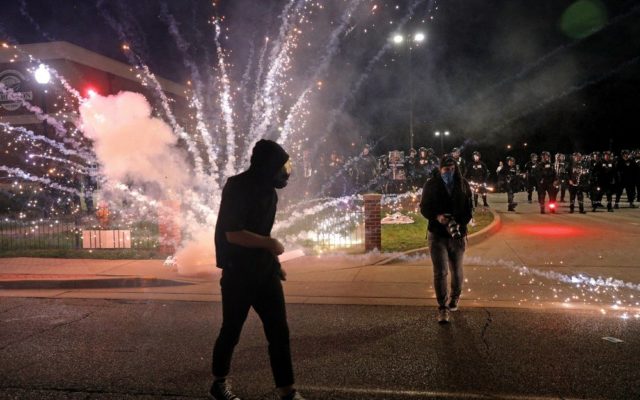 Fireworks thrown by protesters explode outside the Ferguson police department on Sunday, May 31, 2020, as police get set to advance onto S. Florissant Road to clear the crowd from which they were thrown. New video of alleged excessive force in Minneapolis sparked nationwide demonstrations. (Christian Gooden/St. Louis Post-Dispatch via AP)

The Iowa Department of Natural Resources attached some numbers to the reduced air quality conditions that came as a result of fireworks and stagnant air in the state on the 4th of July.

Fine particle matter is the national measurement standard for air quality. A national standard is 35 micrograms per cubic meter for a 24-hour period. Several communities exceeded that standard on July 4th and 5th. The exceedances were the first recorded in the state for the year. Des Moines had a 24-hour average of 108.7 micrograms per cubic meter on the 4th and even 60.9 one day later on the 5th. Muscatine and Davenport were also communities that exceeded the standard to an “unhealthy” category. Any average greater than 55 is considered unhealthy.

There was also an air quality advisory that was put into effect for eastern Kansas on Sunday morning, July 5th.