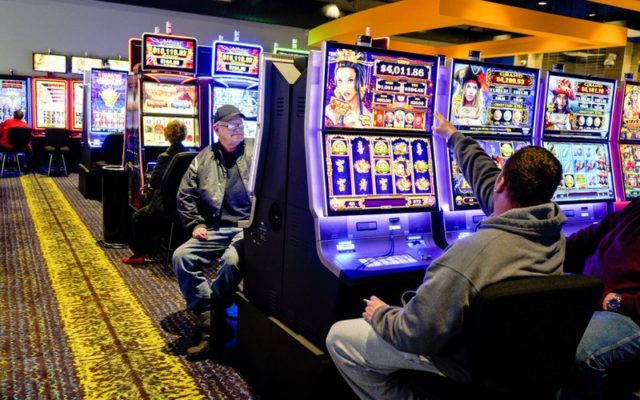 FILE - In this Feb. 14, 2019, file photo, patrons plays the slots at the Ponca Tribe's Prairie Flower Casino in Carter Lake, Iowa. On Monday, Aug. 12, 2019, the Ponca Tribe of Nebraska has again scored a legal win in its fight to keep its Prairie Flower Casino in western Iowa open after a federal judge rejected motions by the states of Iowa and Nebraska and the Iowa city of Council Bluffs seeking to derail the casino. (AP Photo/Nati Harnik, File)

(Radio Iowa) Iowa casinos took in a record amount of money in the fiscal year that just ended — despite a slowdown in the finals months. Racing and Gaming Administrator, Brian Ohorilko says pent up demand showed early.

“The industry really had a lot of success at the beginning of the fiscal year. So that would have been July through December of 2021. A numbers were still very strong from coming out of the pandemic,” Ohorilko says. Iowa casinos reported one-point-seven-six billion dollars in gross revenue for casino games and slots.

“Many of the other entertainment options we saw either closed or had reduced hours, where the casinos in Iowa, for the most part did not. And so the casino industry really was able to kind of fill that gap — and that drove a lot of the revenue,” he says. He says things slowed down in the second part of the fiscal year, especially in this last quarter.

“It will be interesting to kind of keep an eye on what will happen here in the next fiscal year, just based on some of the early signs that we are seeing a slowdown at a number of the facilities across the state,” according to Ohorilko. He says finding enough staff has been a significant problem throughout the casino industry this year and the casinos are doing a number of things to try to counteract that problem.

“We’re starting to see some wages increase, we’re seeing a number of the the businesses or other amenities associated with casinos, maybe adjusting some of their hours to maybe be more friendly or favorable for people seeking employment,” according to Ohorilko. ” But it still is a difficult time in terms of finding employees. And so the facilities are starting to figure that out.” Casinos generally see a little downturn this time of year as people are on vacation or doing more outdoor activities. Ohorilko says the state is also seeing the Nebraska casinos ramping up their operations.

“That really will be another thing to monitor closely — will be how does gambling in Nebraska impact the western Iowa casinos? And what do those casinos in western Iowa do to counteract some of that competition?,” he says. He says it appears that Nebraska will have temporary facilities open up relatively soon, or at least in the fall.