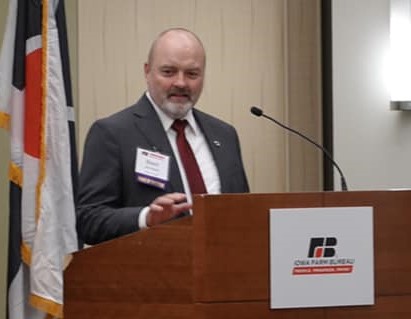 (Radio Iowa) The Iowa Farm Bureau has elected a northwest Iowa farmer and business owner as its next president. According to a news release from the organization, Brent Johnson raises corn, soybeans and cattle on a Calhoun County farm near Manson. He also operates a precision farming company that does soil sampling, deploys drones and offers data management. Johnson replaces 64-year-old Craig Hill of Ackworth who is retiring after a decade as the organization’s president.

“I farm and enjoy the aspects of the farming operation,” Hill says. “I’m of that age where, you know, while I’m healthy and able, I want to do some things and we’re going to do those and we’ll see where it goes from there.” Hill says soon after he became Iowa Farm Bureau president in 2012, he was part of a group that greeted Xi Jinping in Des Moines, just before Xi became president of China.

“We knew the market demands of China. They’re a very large population and the growing need for food and it was an exciting opportunity to talk about trade and to hopefully prepare to be a large provider of their needs going forward,” Hill says, “so trade has been so important from the very beginning to me, the trade war that disrupted a bit of things a few years ago during my tenure, the challenges there.” Hill says he’s proud the Farm Bureau was successful in scuttling rules that could have made more Iowa waterways subject to federal regulation.

“Something that would have been very critical to this organization and to our farmers and we avoided that,” Hill says. Hill says the greatest frustration during the past decade has been the federal waivers that have exempted oil refineries from ethanol blending obligations.

“Just think how perverse this is,” Hill says. “We have an EPA that’s for clean air, right? And you have a product, a liquid fuel, that is the cleanest burning fuel that can be offered.” Johnson, Hill’s successor, was elected president yesterday (Wednesday) at the Iowa Farm Bureau’s annual meeting. Johnson was not available for media interviews after his election.