Iowa State Archery Tournament is on Target To Draw 2,100 Students From 110 Schools 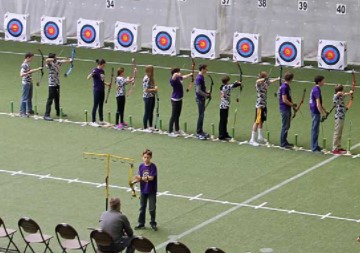 DES MOINES, IA (Radio Iowa) Basketball isn’t the only sport with its state finals in Des Moines this week. The National Archery in the Schools Program is holding its state-level tournament Saturday and Sunday at the Iowa State Fairgrounds. Zach Benttine, the Iowa D-N-R’s archery coordinator, says hundreds of students from all corners of the state will be taking part in what’s now the largest youth archery tournament in Iowa.

“We have around 1,800 for bullseye and 660 for 3-D,” Benttine says. “Some kids will participate in both but we’re factoring about 2,100 different archers will be competing and they’re going to represent about 110 schools.” The competition begins at 8 A-M both days for the bullseye and 3-D competitions. The bullseye involves shooting at a traditional round target, while the 3-D competition involves foam animals ranging in size from a turkey to a ram. Iowa student participation in the National Archery in the Schools Program has grown each year since being launched in 2006 to more than 45-hundred participants this year.

“Archery is one of the safest sports statistically out there and anybody can shoot archery, there’s no limitations,” Benttine says. “Tall, short, you could be the star basketball player, you can be anything. Anybody with a little bit of practice can succeed.” This weekend’s top archers are wide ranging in age and they can earn money for college.

“Fourth grade is the earliest a student can participate so it goes fourth grade all the way up to 12th grade and we have three divisions, elementary, middle school and high school,” Benttine says.

“We give away a bunch of scholarships, prize bows and then team grants for some of the high school teams that win, almost $20,000 in scholarships and prize money will be given out.” Learn more about the Iowa Archery in the Schools Program at: www.iowadnr.gov/nasp