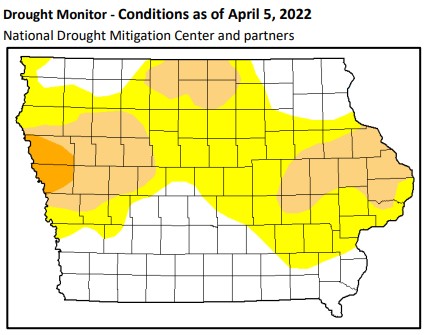 DES MOINES, IA  (Radio Iowa) A majority of Iowa remains in dry or drought conditions — but things have improved quite a bit in the last month. The DNR’s Tim Hall tracks the water summary.

“You compare the drought monitor map from early March to late March — we saw significant improvement. At the beginning of March, about 90 percent of the state was rated in some form of dryness and drought — now we are down to 60 percent,” according to Hall. He says turning things around is not a quick process.

“You have to remember that the drought that we came through last year that we are still kind of working out way of, was so deeply entrenched in that state that it’s just going to take awhile to slowly dig ourselves out of those precipitation deficits we’ve been at,” according to Hall. He says the driest areas start in central Iowa and move east and north.

“Up toward Cedar Rapids and Waterloo, up toward northeast Iowa, sort of that east-central part of the state they’ve had some pretty good rainfall over the last month. Northeast Iowa has been pretty wet, in fact we saw some reductions in the Drought Monitor just in that east-central, northeast Iowa location just in the last week or two,” he says. “So, they’re getting what they need in that part of the state.” There are still some areas to the west that could use more rain as they have D-2 or severe drought.

“In Monona and Pottawattamie County in western Iowa, just about two percent of the state. That’s a little bit troubling to see that creep in, because that’s a part of the state where we’ve had some drought challenges in the past,” he says. Hall says the increased rainfall hasn’t caused any problems.

“We have not seen any substantial flooding this spring, which is a great thing for us not to have. And it kind of indicates that the rain we’ve gotten in addition to getting the right total inches of rain, it’s also come over very slow, long periods of time, and it’s had a chance to soak into the ground. So that part of the precipitation in March has also been really, really helpful,” Hall says. He says everything worked well with the snowmelt as well.

“The snowpack was not significant, the snowmelt came very gradually — so really, the timing of the rain and snowfall has been almost ideal,” Hall says. You can see Iowa’s water resource trends at: www.iowadnr.gov/watersummaryupdate