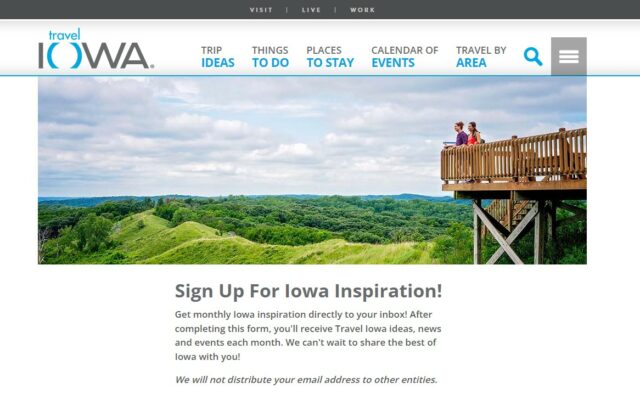 “And for the first time — it’s a little risky, but we’re out there — we’re touting Iowa’s beauty in all four seasons. We just need to own it. From zip lining through the fall foliage of Dubuque — I’ve done that — to skiing down the Seven Oaks in Boone, we’re doing it all,” Reynolds says. “We’re showing it all and we’re also investing more in local marketing efforts.” That includes a new, one million dollar state-funded initiative with the Iowa Restaurant Association and Iowa Hotel and Lodging Association to market Iowa as a destination for business travel, festivals and sporting events. Reynolds was the opening speaker at the Iowa Tourism Conference — the first time in two years the conference is being held in-person.

“You know, we have a great story to tell and there’s never, ever been a better time to do so,” Reynolds says. A video series is being launched called “The Soul of Iowa” with an initial showing Tuesday in Des Moines.

“I don’t want to say too much and spoil the surprise, but you’ll find it showcases the state in an entirely fresh perspective,” Reynolds says. Reynolds says the state has used federal pandemic relief funds to make unprecedented investments in tourism. Last month, the governor awarded Iowa’s commercial airports 100 million dollars in federal funding and this month she announced another 100 million dollars in pandemic relief would be handed out as grants to upgrade existing tourist sites and build new ones. The governor says more than 41 million adults visited Iowa in 2021.

“Iowa saw the second-highest road trip recovery rate in the nation during the first two months of 2022,” Reynolds says. “Road trips in Iowa during that time were 15% higher than they were in 2019.” Reynolds says that’s a stat that shows it makes sense to do more to promote winter travel destinations in the state.