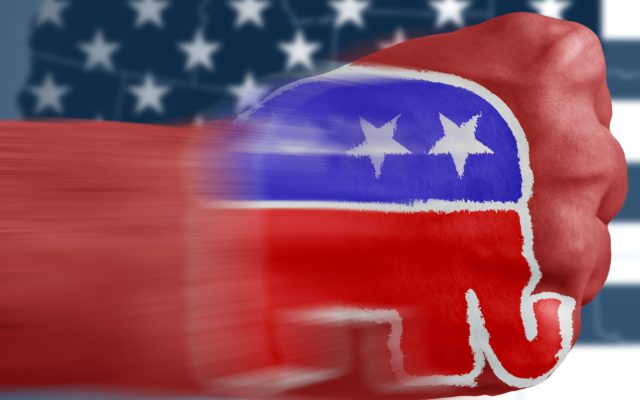 DES MOINES, IA (Radio Iowa) The Iowa Republican Party’s fundraiser last (Wednesday) night showcased the GOP’s top of the ticket candidates this November AND focused on the presidential campaign that will soon follow.

“Iowa Republicans will start the presidential process. We are first in the nation.” That’s Iowa Republican Party chairman Jeff Kaufmann. He led a group of national party officials who recommended that Iowa’s Caucuses go first as Republicans select a presidential nominee in 2024. Republican National Committee Chairwoman Ronna Romney McDaniel says she put Kaufmann in charge to send the signal that she did not want the order of voting events in the next presidential campaign to change.

“I knew the Democrats were going to be changing their map. I mean, they had such a hard time in 2020 and I figured they’d be changing and I wanted a very strong signal from the RNC,” McDaniel says. The Republican National Committee voted in mid-April to keep Iowa’s Caucuses first. The DEMOCRATIC National Committee has been considering a plan that would dislodge the Iowa Caucuses that Democrats participate in from the lead-off spot in 2024. McDaniel suggests the decision’s been made, but Democrats delayed the announcement so as not to distract from Iowa’s 2022 elections.

“The Democrats are walking away from Iowa,” McDaniel said. “It is a very clear signal they do not want to come here anymore and Republicans have re-upped our commitment to your great state.” The fundraiser opened with a prayer from Steve Scheffler, the Republican National Committeeman from Iowa. He mentioned the FBI’s search of former President Trump’s home in Florida.

“Lord, we know that we’re at a tipping point in our country,” Scheffler said. “We know that evil surrounds by looking at things that happened just a couple of days ago with President Trump and the DOJ…the Justice Department and the FBI being totally out of control.” Governor Kim Reynold accused the Biden Administration of unleashing the FBI on parents, taxpayers, gun owners AND the former president.

“We are at an all-time low, folks,” Reynolds said. “Elections matter and we need to step up and we need to show up and we need to let ’em know that enough is enough and we are not going to take it any longer.” Senator Chuck Grassley says he spoke with F-B-I director Christopher Wray and asked about the classified documents Trump was keeping at his Mar-A-Lago estate.

“How come you did not negotiate something with the president as you did with Hillary Clinton about her emails?” Grassley asked during his speech to the GOP crowd, who responded with applause and cheers. The Republican National Committee chairwoman says the Biden Administration needs to reveal why Trump’s home was searched.