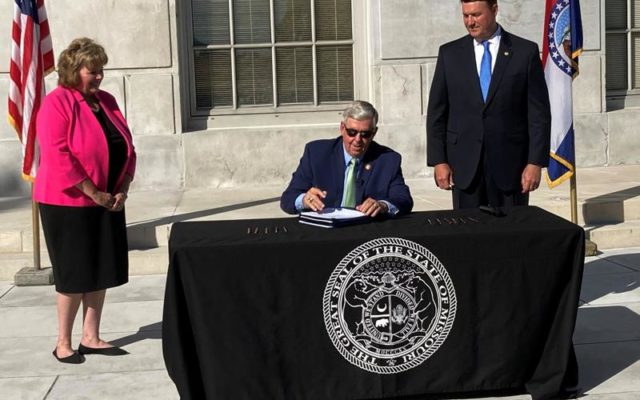 Missouri Gov. Mike Parson signs legislation limiting the during of local public health orders during a ceremony Tuesday, June 15, 2021, outside the state Capitol in Jefferson City, Mo. The new law took effect immediately and was passed in response to local restrictions imposed during the coronavirus pandemic. Among its supporters were state Sen. Sandy Crawford, left, and House Speaker Pro Tem John Wiemann. (AP Photo/David A. Lieb)

“The public safety of the people of the United States and citizens of Missouri is paramount,” Boynton wrote in the letter.

President Joe Biden has made gun control laws a priority of his administration, and the House has passed two bills requiring background checks on firearms sales and an expanded review for gun purchases, though they face a tough road in the Senate. But states, including Missouri, have increasingly worked to loosen gun laws, including abandoning requirements that people get training and pass background checks to carry concealed handguns.

Missouri’s law would subject law enforcement agencies with officers who knowingly enforce any federal laws to a fine of about $50,000 per violating officer.

Republican lawmakers who worked to pass the bill have said they were motivated by the potential of more restrictive gun laws in the Biden administration. But state Democrats have argued the law is unconstitutional and have predicted it would not pass a challenge in the courts.

The Justice Department argued in the letter that the state lacks the authority to shield any Missouri businesses or citizens from federal law or to prevent federal law enforcement officials from carrying out their duties.

Boynton said the bill “conflicts with federal firearms laws and regulation” and federal law would supersede the state’s new statute. He said federal agents and the U.S. attorney’s offices in the state would continue to enforce all federal firearms laws and regulations. He asked that Parson and Eric Schmitt, the state’s attorney general, clarify the law and how it would work in a response by Friday.