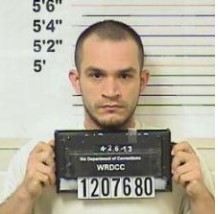 Shaun A. Pickens. Photo by Missouri Department of Corrections.

A Kingston man was taken into custody Thursday morning on allegations of driving while intoxicated.

According to the Missouri State Highway Patrol, 37-year old Shaun A. Pickens was arrested around 7:30 a.m. in Caldwell County on Felony Driving while Intoxicated charges, as a persistent offender.  He was also cited with careless and imprudent driving.

Pickens was taken to the Caldwell County Detention Center on a 24-hour hold.