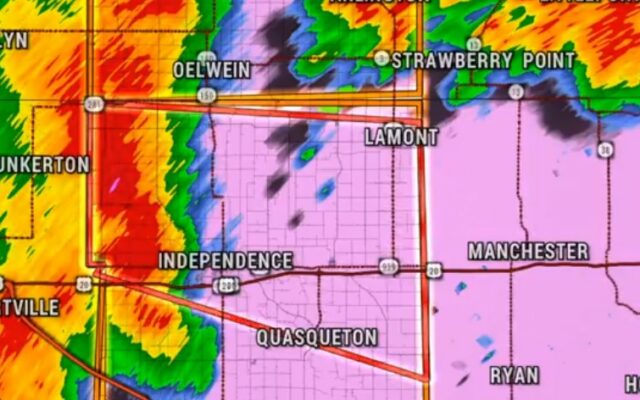 (Radio Iowa) The powerful storms that thundered across Iowa last (Tuesday) night -might- be classified as another derecho, what would be the third such storm in three years. Meteorologist Roger Vachalek, at the National Weather Service, says a derecho is a long-running, straight-line wind storm associated with fast-moving severe thunderstorms.

“If you look at the winds that were occurring over much of South Dakota, that would classify as a derecho because it started in the far northwestern portion of the state and they had damaging winds all the way through Sioux Falls,” Vachalek says. “Now, we did have some winds that caused damage here in the state of Iowa, so it’s just a matter of whether or not that gets classified all the way through Iowa or not.” Iowa experienced very damaging derechos in August of 2020 and in December of 2021. Last night’s severe storms dropped inch-diameter hail in Worth County and up to four inches of rain in some areas, which prompted flash flooding, along with very strong winds.

“The storm that rolled over the state affected mainly the northern portion of Iowa and winds ranged from 60 to 70 miles per hour,” Vachalek says. “We had a gust in Clear Lake near Mason City of 68 and there were some reports around Cedar Rapids of around 70 miles per hour as well.” Tornado sirens sounded in a few Iowa communities last night, but -no- twisters have been confirmed as yet.

“Unofficially, we’re looking into one that may have been around the Estherville area. There were some funnel clouds reported also in eastern Iowa, looks like near Buchanan County as well last night,” Vachalek says. “We’ll have to do some investigation into those reports before we can officially say something about that.” On the plus side, slightly cooler weather is coming behind the storm. After high temperatures mostly in the 90s the past few days, forecasters say highs through Saturday may only be in the 80s, before the heat returns Sunday and into Monday.