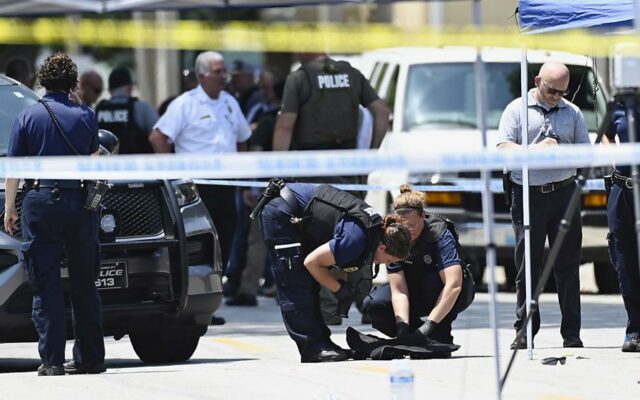 Law enforcement officers look over the protective vest that North Kansas City Police Officer Daniel Vasquez was wearing when he was fatally shot during a traffic stop, Tuesday, July 19, 2022, in North Kansas City, Mo. A suspect is in custody. (Tammy Ljungblad/The Kansas City Star via AP)

NORTH KANSAS CITY, Mo. (AP) — A Missouri man was charged Wednesday with first-degree murder and armed criminal action in the shooting death of a police officer during a traffic stop prompted by an expired temporary tag on the vehicle.

Joshua Rocha, 24, of Kansas City, was being held on $2 million bond in the death of North Kansas City police officer Daniel Vasquez, 32, who was killed Tuesday. Rocha will be arraigned Thursday.

According to a probable cause statement, Rocha told police after his arrest that he shot the officer because he didn’t want to go to jail or have his vehicle towed.

Rocha told police he was on his way to buy ammunition for a rifle he had in the vehicle when he was stopped.

Vasquez’s dashcam video shows Rocha shooting the officer once in the face after partially opening the car door, then stepping out and firing two more shots at Vasquez, who was lying on the ground, according to the statement.

Rocha said his gun jammed at one point. but that he was able to clear it and fire at Vasquez again, according to the statement.

Rocha fled in his vehicle and later changed his clothes, shaved his goatee, and spray painted part of his car. But he later turned himself in to Clay County authorities, saying “I committed murder,” the statement says.

Clay County Prosecutor Dan White said the investigation is ongoing, but prosecutors feel “very comfortable” with the evidence they have against Rocha.

If convicted of first-degree murder, Rocha could face the death penalty or life in prison without the possibility of parole.

Mike Wood, deputy chief of the Kansas City police department, which is conducting the investigation, said Rocha owned the vehicle he was driving. He was not aware of any previous contact between Vasquez and Rocha, who does not have an extensive criminal record.