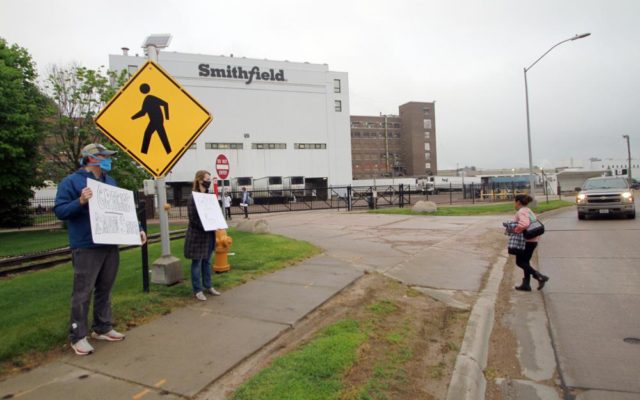 FILE - In this May 20, 2020, file photo, residents cheer and hold thank-you signs to greet employees of a Smithfield pork processing plant as they begin their shift in Sioux Falls, S.D. Workers on farms and at meatpacking plants who were severely affected by the coronavirus pandemic will be eligible to get grants of up to $600 per person as part of a new $700 million aid program the U.S. Department of Agriculture announced Tuesday, Sept. 7, 2021. (AP Photo/Stephen Groves, File)

OMAHA, Neb. (AP) — Meatpacking workers and farm workers who were severely affected by the coronavirus pandemic will be eligible to get grants of up to $600 per person as part of a new $700 million aid program the U.S. Department of Agriculture announced Tuesday.

Officials said the grants are meant to defray some of the costs workers bore as many of them bought their own protective equipment or took unpaid leave as the virus tore through their industries even as they were required to keep showing up for work.

“While the rest of America could work from home, these brave men and women continued to show up for work every single day to ensure that we all food on our tables that we could eat,” said Marc Perrone, president of the United Food and Commercial Workers union. “Meatpacking plants experienced some of the most deadly COVID-19 outbreaks when the pandemic first came around and there were workers that are deserving of our help, and our thanks and our support.”

Last spring, the virus tore through meatpacking plants, where workers stand shoulder-to-shoulder on production lines. The UFCW union, which represents roughly 80% of the nation’s beef and pork workers and 33% of its poultry workers, estimates that at least 132 meatpacking workers died of COVID-19 and at least 22,000 workers have been infected or exposed to the virus.

At the height of the outbreaks last spring, the meat industry’s production fell to about 60% of normal levels as a number of major plants were forced to close temporarily for deep cleaning and safety upgrades or were forced to work at slower speeds because of a shortage of workers.

For instance, more than 1,300 Smithfield workers were sickened and four died last year when the virus rampaged the company’s Sioux Falls, South Dakota, plant. At a major pork plant in Waterloo, Iowa, more than 1,000 of the Tyson Foods plant’s 2,800 workers were infected and at least six died.

“I think it’s important that we recognize that doing this essential work has also come not only at a potential physical risk but also at a financial risk,” Agriculture Secretary Tom Vilsack said. “Many of these workers have had to out of their pocket pay for masks or personal protective equipment during the course of this pandemic. some have had to take unpaid medical leave.”

The grants to workers will be handed out by an assortment of nonprofit groups that apply to work with the government. Agriculture Secretary Tom Vilsack said he hoped to keep administrative costs and requirements to apply for the money to a minimum so more workers could be helped.

“I’m hopeful that we’ll be able to provide as much help to as many people as possible,” said Vilsack.

A small part of the aid package worth $20 million will provide grants to grocery store workers as part of a pilot program.

In addition to the grants to workers, Vilsack said the USDA would soon be announcing another $700 million aid program to send money to food processors, farmers markets, distributors and other food vendors affected by the pandemic.