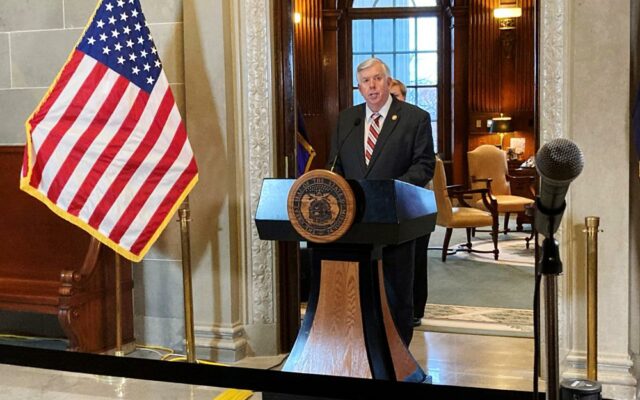 Missouri Gov. Mike Parson announces that the state is switching to an endemic phase of handling COVID-19 during news conference on Wednesday, March 30, 2022, at the state Capitol in Jefferson City, Missouri. Parson declared that "the COVID-19 crisis is over" in Missouri. (AP Photo/David A. Lieb)

(MISSOURINET) –  Governor Mike Parson’s State of the State Address Wednesday received a large amount of bipartisan applause. House Minority Leader Crystal Quade told reporters afterward that the number of times Democrats gave the Republican governor a standing ovation was “weird.” But she hopes it leads to a better working relationship with the governor’s office and with Republican leaders in the House and Senate:

Quade says House Democrats’ top priorities include focusing on where the state’s 6-billion-dollar surplus is spent. She also wants to see language added to Missouri’s law that bans almost all abortions, to clear up any gray areas that might result in health care professionals being arrested and prosecuted for performing an abortion to save a woman’s life.