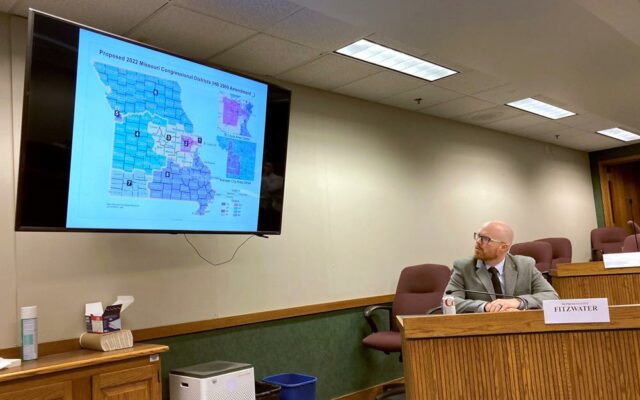 Missouri state Rep. Travis Fitzwater looks at a newly proposed map for dividing up Missouri's congressional districts during a committee hearing on Wednesday, May 4, 2022, in Jefferson City, Mo. Fitzwater joined other Republicans on the House Special Committee on Redistricting in voting to advance the plan to the full House for debate. (AP Photo/David A. Lieb)

JEFFERSON CITY, Mo. (AP) — A Missouri House committee advanced a new plan for dividing up the state’s congressional districts Wednesday, seeking to break a standoff with the Senate and avoid the need for court intervention to adopt voting districts for this year’s elections.

The new proposal comes with a little over one week remaining in Missouri’s legislative session and, if adopted, is expected to continue Republicans’ current 6-2 advantage over Democrats in the U.S. House delegation.

Missouri is the only state where lawmakers have not at least passed a congressional redistricting plan, though New Hampshire lawmakers also are working on revisions after a pledged veto. Courts in Kansas and New York have overturned maps enacted by state lawmakers, and legal challenges also are pending in other states.

Though Republicans control both the Missouri House and Senate, they have been sparring about how aggressively to draw district lines to their favor and which communities should be split to ensure each district has an equal number of voters. The latest plan was put forth by House Redistricting Committee Chairman Dan Shaul and adopted by the panel without Democratic support.

“It believe it stands a chance of passing,” Shaul said. “It was created to try to make sure it survives the Senate.”

The new plan comes as lawsuits are pending in state and federal courts seeking to order new maps based on the 2020 census. The suits say the maps adopted after the 2010 census are no longer constitutional, because district populations no longer are equal.

The Missouri House and Senate each previously passed their own versions of a redistricting plan. One sticking point has been the 2nd District in suburban St. Louis, held by Republican Rep. Ann Wagner. The district is the only one that’s close to being politically competitive, and Republicans want to fortify their hold on it.

Under the latest plan, the 2nd District would include part of St. Louis County plus portions of St. Charles, Warren and Franklin counties to the west. Republican candidates would have fared better in the proposed district than under current boundaries, according to political data provided by Missouri House staff.

Though much of the focus has been on the 2nd District, some of the biggest population shifts would occur in the neighboring 3rd District, which stretches from suburban St. Louis to central Missouri. About 40% of its people would be new to the district, according to figures cited by Shaul.

The city of Columbia would be split, with the southern part — including the University of Missouri campus — in the 3rd district and the northern part in the 4th District, which stretches west to the Kansas border.

“Our economic and cultural affinities lie more with the Springfield market and southwest Missouri than other regions of the state,” Webster County Clerk Stan Whitehurst said.

Shaul said the new plan could be considered by the full House on Monday, allowing time for the Senate to consider it before the May 13 deadline to pass bills.