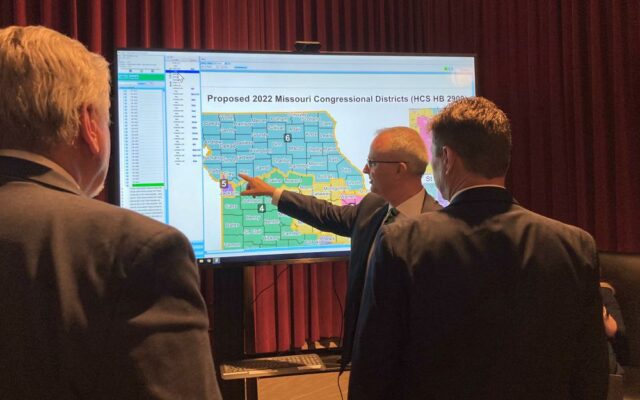 Missouri state Rep. Doug Richey points out elements of a proposed congressional redistricting map to fellow lawmakers during a House debate on Monday, May 9, 2022, in Jefferson City, Missouri. The state Legislature faces a May 13 deadline to pass a redistricting plan before the end of its session.(AP Photo/David A. Lieb)

JEFFERSON CITY, Mo. (AP) — With time running short, the Missouri House on Monday passed a newly proposed map for the state’s eight congressional districts that — if the Senate agrees — could be used in elections later this year.

The plan approved 101-47 by the state House is projected to continue Republicans’ 6-2 advantage over Democrats in the state’s U.S. House delegation. It marked an attempt to avoid court intervention and break a stalemate with the state Senate before a Friday deadline to pass legislation.

Though Republicans hold large majorities in the state Capitol, Missouri is one of the last states still struggling to enact a congressional redistricting plan based on the 2020 census. Republican factions have been squabbling about how aggressively to draw districts to their favor, and which communities to divide when balancing the population among districts.

Though some remained unsatisfied Monday, a majority voted to advance the new plan.

It’s “the best map that we’re going to get at this point,” said Republican state Rep. Dan Shaul, chairman of the House’s redistricting committee.

But state Rep. Jerome Barnes, the ranking Democrat on the House’s redistricting panel, said the “map was motivated by partisan purposes and not public input.”

To accomplish that while balancing populations, the map splits several communities. One of the most notable divisions is in Columbia, where the southern part and the University of Missouri campus would shifted into 3rd District that stretches eastward toward the St. Louis area. The northern part of Columbia would remain in the 4th District that stretches westward to the Kansas border.

But Shaul said it was better than a version previously passed by the Senate that would have split apart the university campus.

Lawmakers in charge of redistricting in some states have acted aggressively to draw lines to their favor. But that tactic has not always worked out.

New districts are limbo in New York and Kansas, where courts struck down plans enacted by their Democratic- and Republican-led governments, respectively. Lawsuits also are pending against redistricting maps in other states, including Florida and Ohio.

In New Hampshire, the Republican-led Legislature is working on a revised plan after GOP Gov. Chris Sununu pledged to veto the first version it passed.