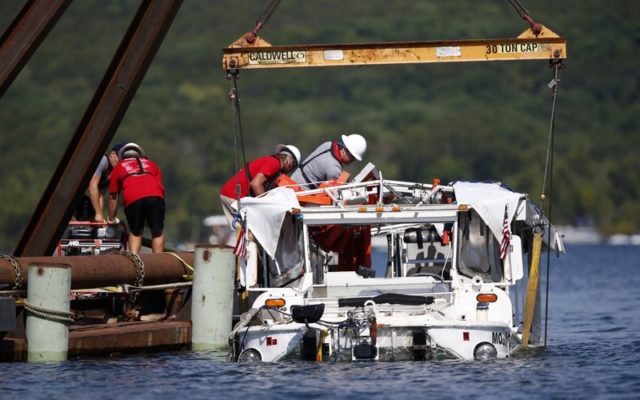 FILE- In this July 23, 2018, file photo the duck boat that sank on July 19 in Table Rock Lake in Branson, Mo., is raised. The company that owns the boat that sank, killing 17 people, has settled the first of several lawsuits filed in the accident. (Nathan Papes/The Springfield News-Leader via AP)

Missouri’s junior senator says the time has come for him to go to the U-S Senate floor and try to pass his duck boat legislation himself.

GOP Senator Josh Hawley is frustrated that the bill is stuck in the Commerce Committee, saying he’s trying to prevent a repeat of the deadly 2018 tragedy on southwest Missouri’s Table Rock Lake.

Hawley’s bill came after 17 people were killed in the Table Rock Lake incident. The legislation would require amphibious passenger vessels to be equipped to stay afloat, in the event of flooding. The bill would also require duck boats to remove canopies.