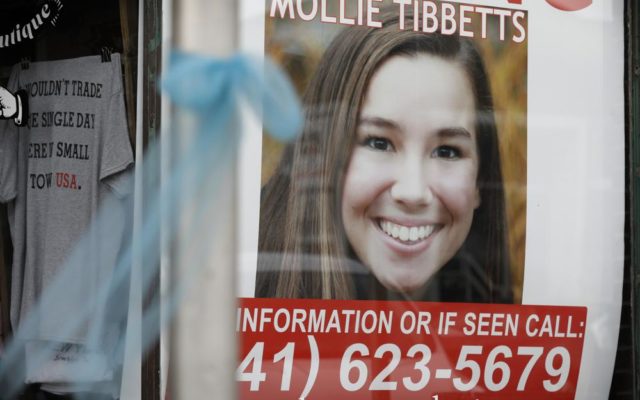 FILE - In this Aug. 21, 2018, file photo, a poster for missing University of Iowa student Mollie Tibbetts hangs in the window of a local business in Brooklyn, Iowa. Cristhian Bahena Rivera was convicted of first-degree murder in the July 2018 stabbing death of 20-year-old Mollie Tibbetts. Judge Joel Yates has granted a defense motion for an inmate at an Iowa prison, to testify at Rivera's sentencing hearing at the Poweshiek County Courthouse in Montezuma, Iowa. (AP Photo/Charlie Neibergall, File)

IOWA CITY, Iowa (AP) — Prosecutors in May dismissed a defendant’s testimony that he was framed by two masked men for the kidnapping and killing of an Iowa college student, calling it a figment of his imagination.

Jurors agreed, convicting Cristhian Bahena Rivera of first-degree murder in the July 2018 stabbing death of 20-year-old Mollie Tibbetts in one of the state’s most high-profile cases in years.

But to two listeners outside the courtroom, Bahena Rivera’s shocking story rang at least partially true. They separately came forward recounting conversations in which another man bragged about his role in killing Tibbetts and blaming the crime on a Hispanic man.

Both witnesses are unknown to each other, yet independently identified the same suspect to authorities after Bahena Rivera testified in his own defense May 26, his lawyers revealed in seeking a new trial for the 27-year-old Mexican national who came to the U.S. illegally as a teenager.

The identity of the man implicated by the two witnesses hasn’t been revealed. But Judge Joel Yates granted a defense motion for one of them — an inmate at an Iowa prison — to testify at Bahena Rivera’s sentencing hearing Thursday at the Poweshiek County Courthouse in Montezuma, which is in central Iowa about halfway between Des Moines and Iowa City.

Prosecutors remain confident in Bahena Rivera’s guilt and they plan to respond to the defense claims this week, according to state attorney general’s office spokesman Lynn Hicks.

The prisoner who will testify Thursday says that when he was housed at a county jail, another inmate told him that Tibbetts had been kidnapped by associates and held at a “trap house” for sex trafficking, where she was bound and gagged, the defense motion says. He says that this other inmate said that he and another person killed Tibbetts after the publicity surrounding her disappearance got too big and that they dumped her body “near a Hispanic male in order to make it appear that the Hispanic male committed the crime,” the filing states.

The witness told prison officials and investigators that he thought the story “was bluster” until he heard Bahena Rivera’s testimony, the motion says.

The second new witness came forward to a local sheriff’s office, claiming she was in a car with the same man a month earlier when he pulled a pistol and said, “That Mexican shouldn’t be in jail for killing Mollie Tibbetts because I raped her and killed her,” the motion states.

The second witness was described as emotional and likely intoxicated, and at least one investigator dismissed the information as not credible. But both accounts were forwarded to Bahena Rivera’s prosecutors, who promptly notified his lawyers near the end of trial.

Defense lawyers say they continued with the trial because they had rested their case and didn’t get more detailed information until after the verdict.

Prosecutors built their case on surveillance video showing Bahena Rivera driving in the vicinity of where Tibbetts disappeared while she was jogging in her hometown of Brooklyn and on DNA evidence showing that her blood was found in its trunk. Bahena Rivera also gave a partial confession and led investigators to a remote cornfield where her body was found a month after she disappeared.

Testifying in his defense through a Spanish language interpreter, Bahena Rivera said that two masked men showed up at his trailer near the dairy farm where he worked, kidnapped him at gunpoint and ordered him to drive. On a rural road where Tibbetts was jogging, he said they had him stop the car as one of them got out, stabbed her to death and put her body in his trunk.

They then ordered him to drive to a cornfield, instructed him to dispose of the body and not to tell anyone about what happened or else they would kill his ex-girlfriend and their young daughter, Bahena Rivera said.

Afterward, defense lawyers said Bahena Rivera never wavered from that story from the moment they began representing him in 2018. In their motion for a new trial, they noted that testing of blood found in his trunk showed DNA from people other than Tibbetts who haven’t been identified.

“While perhaps not every bit of the account fits neatly into defendant’s account of the events, enough of the facts fit to certainly question whether the state would have been able to prove their case beyond a reasonable doubt had this information been known and presented to a jury,” they wrote.