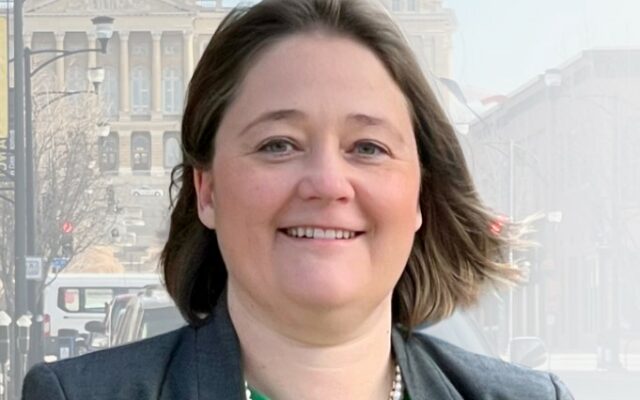 (Radio Iowa) Brenna Bird will take over Monday as Iowa’s attorney general, the first Republican to hold the office in 40 years. Bird’s central campaign promise was to — in her words — see Joe Biden in court.

“Yes, I will be standing up for Iowa and joining any lawsuits against the Biden Administration’s overreach,” Bird says. Bird is still developing a proposed budget for the office, but one of her first moves will be to ask the Republican-led legislature to approve funding for more prosecutors.

“I will be beefing up the prosecution portion of the office to make sure that we can take the cases that Iowans need us to take to court,” she says. Bird, who has been Guthrie County Attorney, says she’ll miss prosecuting cases at the local level. She plans to review the state’s Crime Victim Assistance program.

“We’re going to do an audit of all of those services and grants that are offered to crime victims and those organizations and make sure we are serving victims and that victims are coming first in the justice system,” Bird says, “and we’re also working to have a ‘cold case unit’ to make sure that no one gets away with murder.” In 2021, the Iowa Senate unanimously voted to create a unit in the Iowa Department of Public Safety that would focus on unsolved murders and missing persons cases, but the bill then stalled and didn’t become law. This past year as Bird campaigned, she talked about creating a cold case unit in the attorney general’s office, because most other states have one.

“We would work with all law enforcement agencies, including DPS, local police, sheriffs, ” Bird says. “We would work across the whole state.” Bird also wants to establish what she calls a “special victim’s unit” in the office.

“That would focus on those cases, like child molesters and other cases where it’s so important that people be brought to justice,” Bird says. Bird criticized her predecessor, Democrat Tom Miller, for failing to travel the state and meet with local law enforcement. Bird says she intends to visit every one of Iowa’s 99 counties each year. Bird has announced her top deputy will be Sam Langholz, who had served as chief legal counsel for Governor Reynolds until Miller hired him in 2021. Bird ran against Miller 12 years ago and lost by 11 points. She won this year’s campaign against Miller by one-point-eight percent.