Non-Profit Has $50M Plan for ‘Field of Dreams’ Stadium 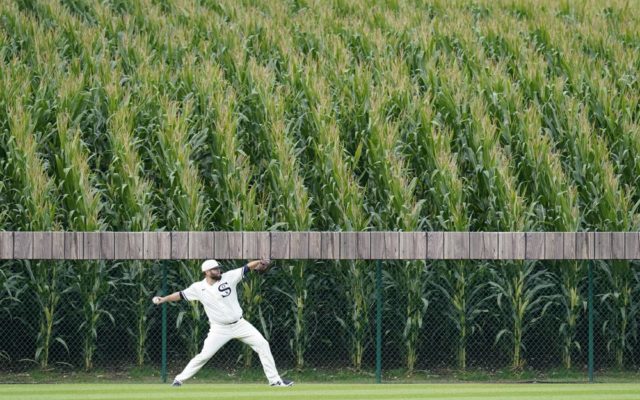 Chicago White Sox pitcher Lance Lynn warms up in the outfield before a baseball game against the New York Yankees, Thursday, Aug. 12, 2021 in Dyersville, Iowa. The Yankees and White Sox are playing at a temporary stadium in the middle of a cornfield at the Field of Dreams movie site, the first Major League Baseball game held in Iowa. (AP Photo/Charlie Neibergall)

DYERSVILLE, IA – Dubuque County Supervisors have approved spending five million dollars in federal funding on a permanent stadium next to the “Field of Dreams” movie site near Dyersville — and a new non-profit plans to seek other grants and private donations for the 50 million dollar project. Major League Baseball set up the playing field at the site for a nationally televised game last August, with another game scheduled there this summer. Travel Dubuque president Keith Ray says the ball diamond, fencing and lights are permanent at the site, so the new “This is Iowa Ballpark” non-profit plans to build a permanent club house, concession stands, restrooms and seating for spectators.

“We’ve had significant interest across the board, across the nation, across the world from individuals, teams that want to play at that site,” Ray says. “…We are trying to get the funds together to build a permanent, world-class, multi-purpose facility there.” Dubuque County Supervisors agreed to use five million dollars of the county’s American Rescue Plan funding on this project. Dyersville officials have approved one million dollars. Ray says the plan is for the stadium to host events mainly from April through November.

“To just showcase what Dubuque County, what rural, what Dyersville, what the State of Iowa is to millions of people,” Ray says. Ray discussed the non-profit’s plans at the Dubuque County Board of Supervisors meeting yesterday (Monday). Ray says it’s important to build on the momentum from the Major League games and the movie that inspired it all.

“Since 1989 when the first couple drove down the driveway from New York, came to Don Lansing’s farm and just wanted to go out on the ball diamond and play catch, it has become an iconic spot not only for the United States, but throughout the entire world.” This project to build a permanent Field of Dreams stadium is separate from the plan from private developers who intend to build a hotel, youth baseball and softball fields and dorms near the movie site.