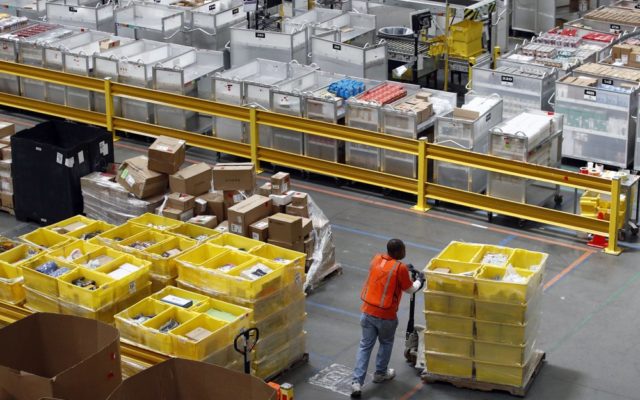 FILE - In this Aug. 3, 2017, file photo, a worker pushes bins at an Amazon fulfillment center in Baltimore. The online shopping giant is holding job fairs across the country next week, aiming to hire more than 30,000 people by early next year, a 5% bump in its total workforce. (AP Photo/Patrick Semansky, File)

OMAHA, Neb. (AP) — Business leaders in nine Midwest and Plains states indicate significant jumps were made in employment and inventories over the last month, but confidence in the economy over the next six month remained at a dismal low, according to a new monthly survey.

The overall index for October of the Creighton University Mid-America Business Conditions released Monday rose to 65.2 from September’s 61.6.

Any score above 50 on the survey’s indexes suggests growth, while a score below 50 suggests recession.

But the survey’s business confidence index, which looks ahead six months, failed to budge from 37 recorded in September. That’s the lowest reading the confidence index has reached since March 2020, when the global COVID-19 pandemic began.

The report indicates that the region is adding manufacturing business activity at a positive but somewhat slower pace.

Business leaders reported strong job growth, with the employment index rising to 66.1 in October from September’s 56.7. Even so, the region has yet to recover all job losses from the pandemic, Goss said.

Wholesale prices continue to climb, with that index registering 96.5 from September’s 94.9, indicating growing pressure from inflation.