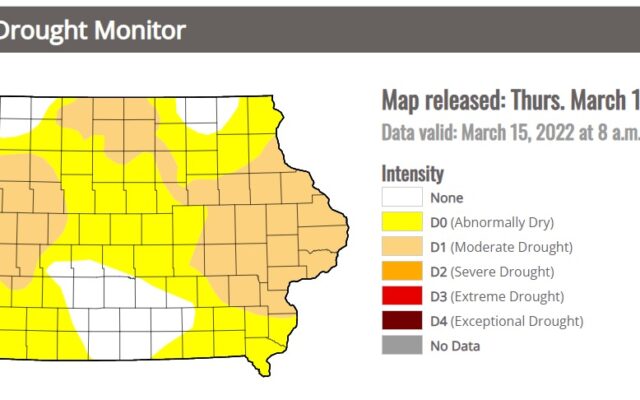 “If we were in relatively decent shape soil moisture-wise right now, I wouldn’t be as concerned, but given that we have dry conditions and that we’re not seeing big help so far this spring, that’s what has me concerned,” Todey says. “Any increase in chances that the drought continues is going to be a problem.” Todey says much of the region is heading into spring with very dry soil and the C-P-C is forecasting drought areas may expand across the Central Plains into spring.
“Originally the thought was that La Nina was going to continue weakening this spring and would not be in effect in the summertime,” Todey says. “Some of the models are hinting that this La Nina could last, maybe not strongly, but last into the summer.” The latest map from the U-S Drought Monitor shows roughly 45 Iowa counties are in the category of abnormally dry, with about 36 counties in moderate drought. Large sections of Monona and Woodbury counties are now listed as “severe drought,” while there are only around 16 counties where soil moisture levels are considered normal.