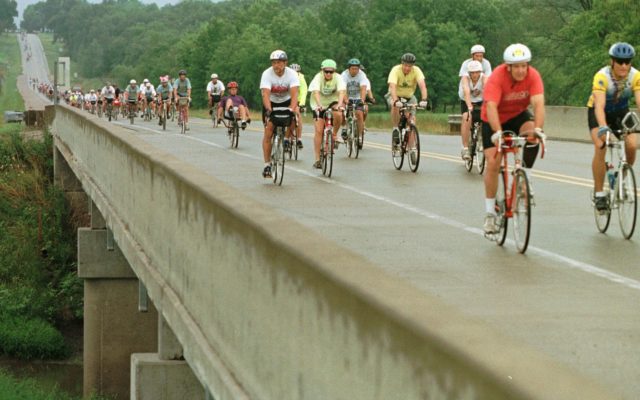 (Radio Iowa) The Register’s Annual Great Bike Ride Across Iowa — RAGBRAI — starts Sunday. However, riders and support crews started converging on Sergeant Bluff Wednesday, as the town is the starting point for this year’s route. Sergeant Bluff City Councilwoman Andrea Johnson says 28-thousand people are expected in the community for the opening festivities this weekend — so the city is asking motorists to avoid the entertainment zone.

“We are asking that people do not drive through our town just because we have lots of bikes and we’re just trying to keep everyone safe,” she says. Saturday’s series of concerts and other activities will begin around noon in Sergeant Bluff. The city has established designated parking areas and three shuttle routes.

“We encourage everyone to come and eat our food and enjoy our bands,” Johnson says. Emergency officials are preparing for excessive heat and the possibility of severe weather. Sergeant Bluff Fire Chief Anthony Gaul says his fire station will be the command post to deal with whatever Mother Nature has in store.

“We did a final test of our outdoor warning system which is meant to alert people that are outdoors in case of severe weather or any other disasters,” Gaul says. “We have a voice function on that as well as the tone siren alert.” If a tornado or winds of more than 70 mile an hour are forecast, the outdoor warning system in Sergeant Bluff is triggered, but they plan to announce any severe weather that does not meet that threshold. Fourteen campgrounds have been established around Sergeant Bluff for the RAGBRAI crowd.

“We have established tornado and storm shelters for every campground. We have access to all of those public safety wise so we can open them up whenever need be and we have sent that all throughout the campground so they know where they are to go.” Gaul and other Sergeant Bluff officials are walking through the campgrounds, too, welcoming RAGBRAI riders and pointing out the emergency shelters. Gaul says the city has a valuable tool that likely will alter the crowds find shelter before dangerous lightning arrives.

“We have a lightning prediction system called THOR GUARD,” he says. “It is set to alert when we have about a 12-15 minute time frame before lightning impacts the community and over the last years it has been very accurate.” Officials have been handing out yard signs to Sergeant Bluff residents that indicate the home is open as an emergency shelter to bicyclists in case of severe weather. The latest forecast indicates there’s a chance for severe storms in the area on Saturday. Early Sunday, RAGBRAI riders will leave Sergeant Bluff and pedal through Bronson, Anthon and Battle Creek before reaching the overnight stop in Ida Grove. The week-long ride covers 454 miles and ends in Lansing on July 30th.